Greetings and as I always love to say once Friday arrives, HAPPY FRIDAY! I hope everyone has had a fabulous week.
This past week, I joined my boyfriend Mike's ultimate frisbee team and will be playing with them for their summer league this year! I have only ever played one season of ultimate before, and it was waaay back in the fall of 2008. The league I played in then was made up of players with a range of skill levels. The summer league I'm joining this year is made up of much more experienced players, and needless to say, I'm not the most experienced player. :-D Mike's team (named Fetch - great name for a frisbee team :)) is made up of players who have mostly been playing for several years so I'm definitely the rookie among everyone! I owe Mike and his teammates a big thank you for taking me under their wings... I plan to learn a lot this season and hopefully improve my game quite a bit!
In honor of my new adventures playing ultimate this summer, for this week's edition of Friday Favorites I thought I'd bring you a few favorite cookie recipes of team Fetch (that is also now my team - yay!). Since dating Mike, I've attended many of the team's games to cheer them on...and obviously I've brought them many different Barbershop baked goodies along the way. Here's the ultimate cookie round-up of treats that team Fetch has enjoyed thus far. ;-)
1) The "Ultimate" Cookie 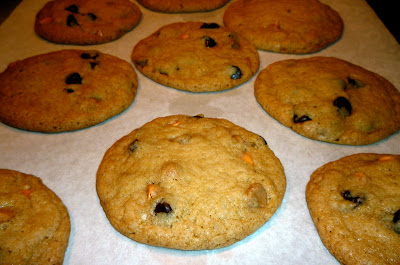 There's a fun story behind this cookie. If you read the blog post I wrote about it last June, you'll see that I randomly jumped in and played in a game with Fetch to fill in for an injured player... I was only there to watch and support the team (with cookies), but I ended up being on the field for most of the game! It was definitely quite fun though. Reading that blog post again, I see that at the end I said: "Perhaps there is more ultimate playing in my future. We shall see!" 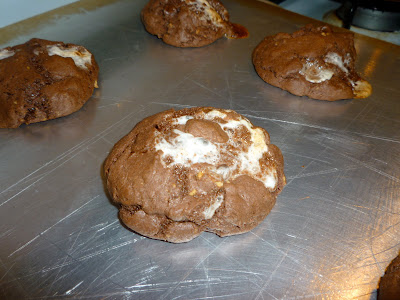 I made the s'mores cookies for the team last summer, and they instantly became a hit. What's not to love about chocolate, graham crackers, and toasty roasty ooey gooey marshmallows? The s'mores cookies are SUPER easy and obviously delicious. You may want to make them for yourself...like today. Just sayin'.... :)
3) Banana Oatmeal Chocolate Chip Cookies 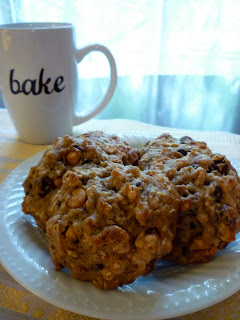 These are one of my all-time favorite cookies, I think! I just love them. I love just about any baked good made with bananas though, so I may be a tad biased. These banana oatmeal chocolate chip cookies are very soft, moist, and flavorful. And they almost seem healthy, almost. ;-) They're actually based on a Cooking Light recipe though, so they're really not all that bad for you! I promise. I originally made these quite some time ago, but I've made them several times since. The picture above is actually from a batch that I brought to a recent Fetch game (before I joined) already this season in 2011! I made this batch with both butterscotch and semi-sweet chocolate chips.
4) The Ultimate Sugar Cookie (apparently when I make cookies for Fetch I like to use the word ultimate to describe them) 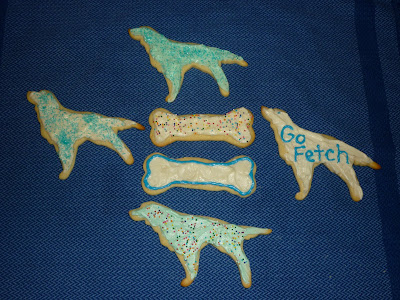 For the team's final tournament last summer, I made sugar cookies (Mom's famous recipe, of course) in the shapes of dogs, dog bones, and frisbees (a.k.a. "discs" to ultimate players)! 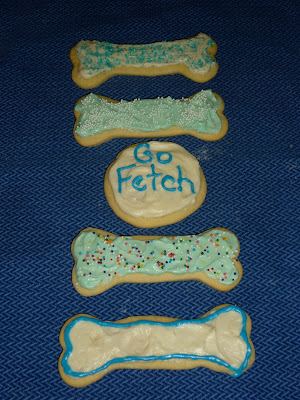 The team loved them. :)
There you have it, a summary of some of my favorite, yummy cookie recipes I've made for Fetch over the past couple years. I will certainly keep baking for the team this summer, and I'll be sure to share more delicious recipes with you! Actually, now that I'm thinking about it a bit more, I'm beginning to wonder if the team took me on just for my baking skills...
Posted by Colleen at Friday, May 13, 2011