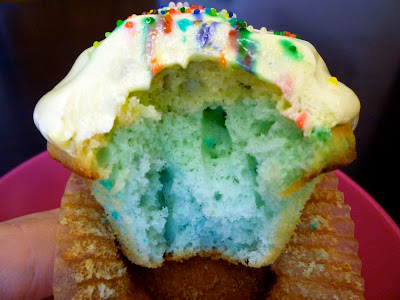 Cupcakes! I've heard that they're becoming less trendy than they have been in recent years (what?!), yet everyone in my world still loves them. So, I'll keep on making them. :)
I made these colorburst cupcakes about a month ago in mid-April (took me a while to blog about them, oops). I think they're the perfect springtime treat! Yellow, green, and blue are super springy colors, wouldn't you agree? They sure do brighten a dreary, rainy day like we're having here today in Boston...

These cupcakes are a brilliant creation of Our Best Bites, a great blog I've mentioned before. If you click on this link, you'll see some pictures of the bold, bright colors used in their cupcakes. They're so pretty! As you can see, I made my version of these cupcakes with yellow, green, and blue food coloring. I actually wanted to use red but I was all out of red food coloring! Oh well. Next time.

The process of making these is rather simple, but it is more time consuming than many other cupcake recipes. You could probably make several different colors if you wanted to, but I chose to just do three. 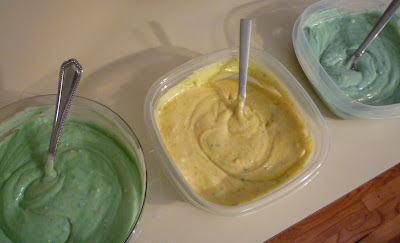 These cupcakes are great because they're fun and creative, but they're also great because they're delicious too! I probably could have used any number of vanilla cupcake recipes, but I chose to follow the one Our Best Bites used for their colorburst cupcakes. It's nice n' easy too because it uses cake mix (but it's doctored up a bit!). I used the Betty Crocker Spring Party Chip mix pictured below. 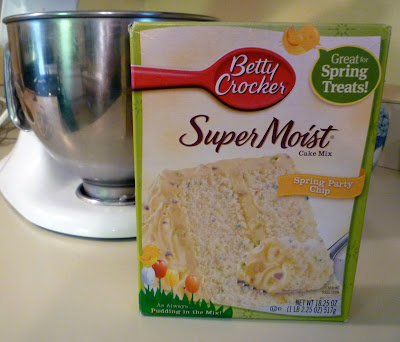 Cupcake Recipe:
-1 white cake mix
-2 eggs
-1 cup yogurt or sour cream (I used light, vanilla yogurt)
-1/2 cup milk (I used skim)
-1/3 cup vegetable oil
Prepare cupcake pan by lining with cupcake liners of your choice. Combine all five ingredients and mix with electric mixer until incorporated (about 30 seconds). Scrape sides of bowl and beat on medium-high for about 2 minutes. Divide batter into separate containers according to how many colors you are making. Use food coloring to create batters of desired colors.
Put a spoonful of each colored batter into the pan one at a time, layering in whichever order you desire. I probably put about one generous tablespoon-full of each color into each cupcake in a regular sized cupcake pan. I also made some mini cupcakes, and I probably put just about a teaspoon or so of each color in those. After spooning out each color, you may want to spread the batter to the outsides of each cup since the batter is pretty thick and won't spread as well on its own. A good tip, offered by Our Best Bites, is to wet the tip of your finger and spread the batter that way.
Bake the cupcakes according to the instructions on the package, and cool completely before frosting. 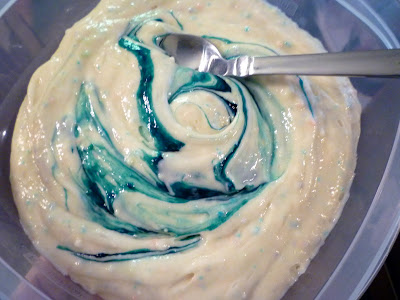 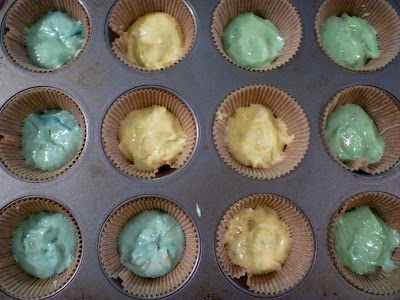 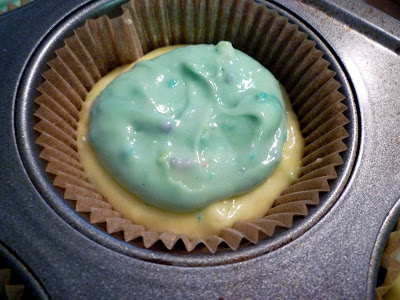 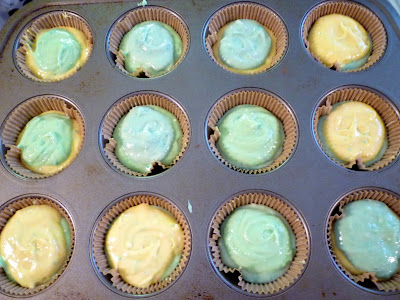 I systematically layered the three colors in these 12 regular cupcakes cups so that each of the three colors would appear on the bottom, middle, and top layers four times each. :) It was a little bit tricky to keep track of what I was doing along the way! 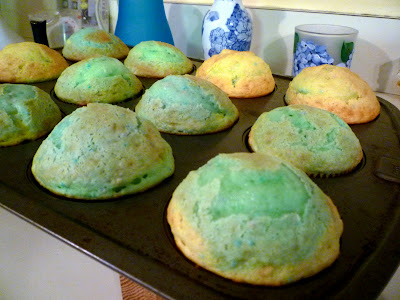 These cupcakes really puffed up! I love how fluffy they are (they tasted light and fluffy too!). 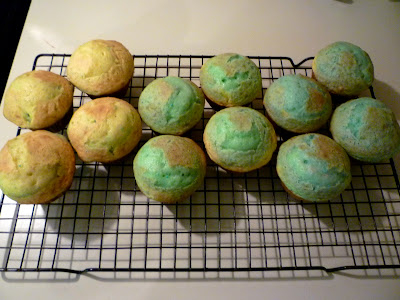 Pretty!
I put together a last-minute frosting for these cupcakes because I messed up the original frosting I made. :(  Tragedy in the kitchen = quick-thinking Colleen. I didn't have the time, nor the ingredients, to make a second batch of the frosting I originally intended to make. So what did I do? I looked at the ingredients in my cupboards and came up with a backup plan!
I ended up making a super simple lemon pudding cool whip frosting. It was a big hit with my coworkers, thankfully!
Frosting Recipe:
-1 package (3.9 oz.) instant pudding mix (I used lemon; you could use any flavor!)
-1 cup cold milk (I used skim)
-1/4 cup powdered sugar
-1 tub (8 oz.) cool whip whipped topping, thawed
Stir together the pudding mix, milk, and powdered sugar with a whisk for two minutes or until smooth. Mix in the cool whip with a spoon or spatula. Spread onto cupcakes immediately or store in the fridge for up to 24 hours. Once the cupcakes are frosted, they should also be stored in the fridge in an airtight container. 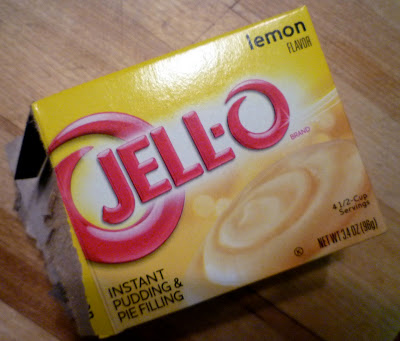 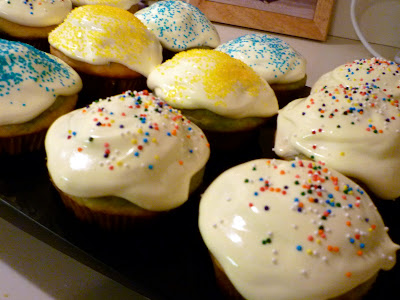 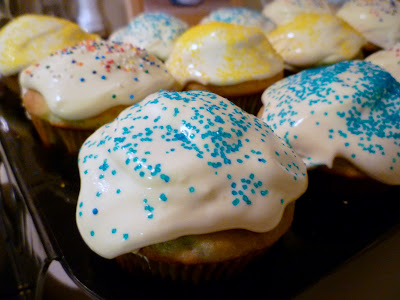 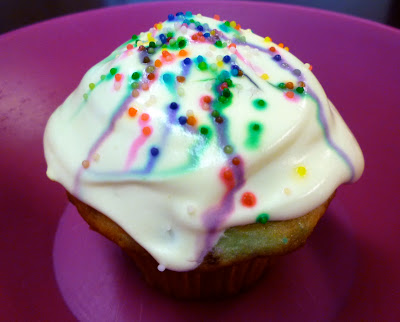 I made these the evening before they were consumed by myself and some coworkers... As you can see in the above picture, as the cupcakes sat overnight in the fridge, the colored sprinkles "ran" into the frosting! It ended up looking kinda cool though, don't you think? 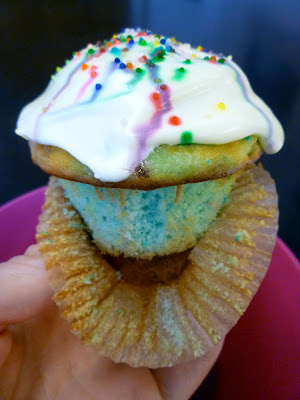 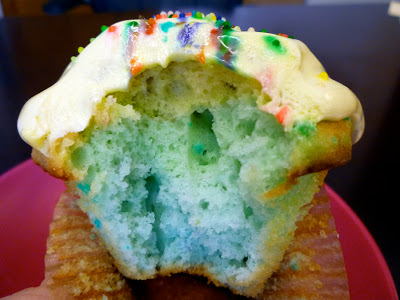 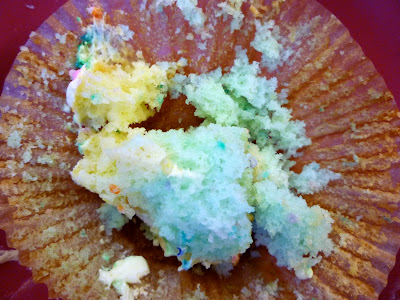 I was sad when I finished my cupcake. :(  It was so yummy! I loved the light, airy texture of the cupcake itself, and the impromptu cool whip frosting ended up being the perfect topping for these cupcakes. It was very flavorful and refreshing - a nice change from other typical frostings!
These colorburst cupcakes would be fun to make for a birthday party (for kids or adults :)), or for a sports team in its team colors, or for any themed party or occasion really (pink and blue for a baby shower; red, white, and blue for Memorial Day or the 4th of July; etc., etc., etc.!). Lots of options and color combinations, friends!
Posted by Colleen at Monday, May 16, 2011