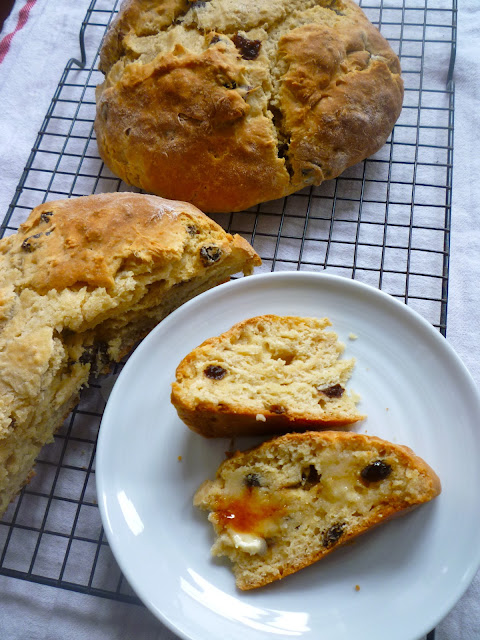 I am quite Irish :) and I love celebrating St. Patrick's Day. Even though it seems as if Irish cuisine doesn't have the best reputation, I think that's silly. The Irish have some fabulous traditional foods! And Irish soda bread is absolutely one of them. In past years on the blog, I've shared with you Irish soda bread, Irish soda bread scones, and Irish soda bread cookies (!!). Well, this year I am sharing Irish soda bread again, but this time it's with a little twist. I soaked the raisins in whiskey for several hours before adding them to the dough, and I also made a whiskey butter syrup to put on the bread (the hubs was a big fan of both these changes!). Deeelicious.

The ideas for both the whiskey soaked raisins and the whiskey butter sauce came from A Cozy Kitchen (a fabulous blog). But, for the actual soda bread recipe, I used my go-to recipe that I've been using for a few years now - Ina Garten's (aka The Barefoot Contessa!). I just love her soda bread and haven't branched out from it because I love it too much!

Here are the ingredients for you, keeping in mind that the ingredients are from Ina Garten and the techniques for the whiskey soaked raisins and whiskey butter syrup are from A Cozy Kitchen.

For whiskey butter sauce:
-remaining whiskey-raisin liquid after raisins have been soaked in it
-2 Tbsp. unsalted butter

Combine the raisins and whiskey in a small, shallow bowl, cover tightly with plastic wrap, and let sit for at least six hours or overnight (I let mine sit overnight). When ready to make the bread, drain the raisins from the liquid (but SAVE the liquid for the whiskey butter syrup!).

Preheat oven to 375 degrees and line a baking sheet with parchment paper. Combine the flour, sugar, baking soda, and salt in the bowl of a stand mixer or a large bowl. Add the butter, and mix on low speed until the butter is mixed into the flour mixture. With a fork, lightly beat together the buttermilk, egg, and orange zest (if using; it's okay to omit the orange zest). With the mixer on low speed, slowly add the liquids to the flour/butter mixture until well-incorporated. Toss the raisins (that have been removed from the whiskey-raisin liquid) with one tablespoon of flour to coat them. Then add them into the dough. The dough will be rather wet.

Using a well-floured board, knead the dough several times, and form into a circle (you can make one large loaf, if you'd like - or two smaller loaves like I did this time - or you can make scones like I did in this blog post). Place the loaf or loaves on prepared baking sheet, and lightly form an X in the center with a knife. If making one large loaf, bake for 45 to 55 minutes. If making two smaller loaves, check on the loaves after about 30 minutes.

When the loaf is done, a cake tester inserted into the center of the loaf will come out clean. Also, if you tap on the side of the bread, it should sound hollow. Cool completely on a cooling rack.

For the whiskey butter syrup, add the remaining whiskey-raisin liquid to a small saucepan on the stove over medium heat. Once it's simmering, add the two tablespoons of butter. Turn the heat down to medium low and mix until the butter is fully melted. The mixture may begin to foam, and when it does, use a spoon to skim the foam off the top. Drizzle the remaining whiskey butter syrup on a slice of your freshly baked soda bread. 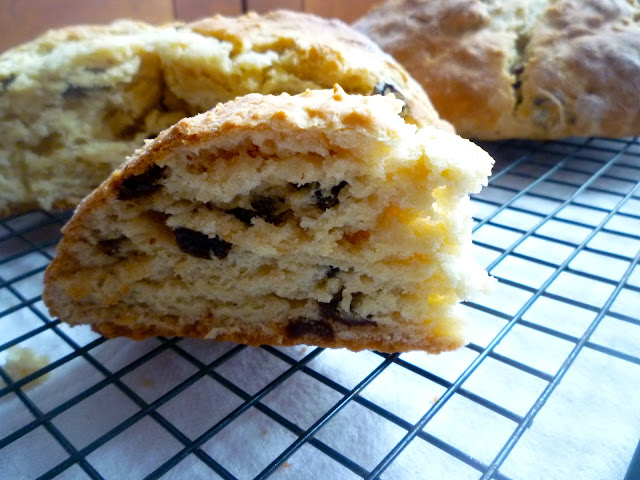 In the past when I've made Irish soda bread, I've often made it with a combination of wheat flour and all-purpose flour. This time I decided to stick to just all-purpose. I actually think that 100% AP flour makes the bread slightly more flakey and delicious than with a mix of AP and wheat flours. Similar to the English muffin bread I posted last week, some things just taste better the classic way, I guess! 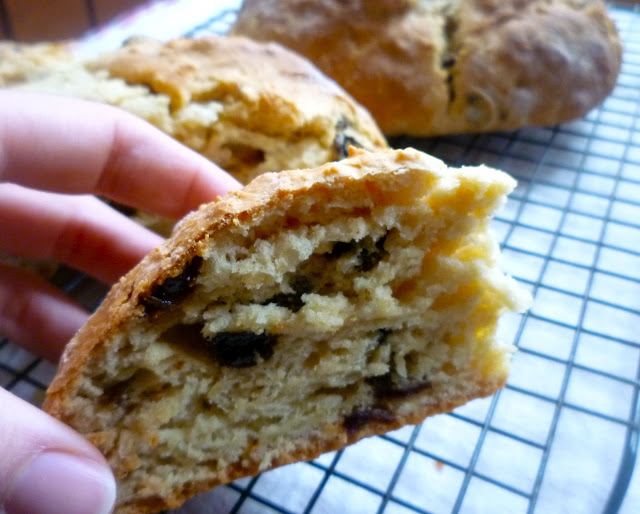 So buttery, soft, and flaky...

This soda bread is not dry, friends! Not in the least. 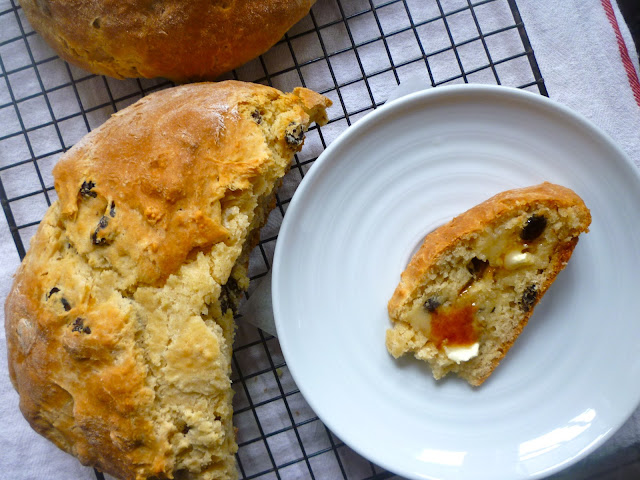 Now adding the whiskey butter syrup into the mix is a whole different story. Boy, is that stuff good! I made this bread yesterday morning, so Mike, my brother (who is visiting for the weekend), and I all tried it. And we all loved it! I was afraid I might not like it because I'm not a big fan of whiskey. But, not to worry, the syrup doesn't have a super strong whiskey flavor; i's only subtle. I served the bread warm, with a little bit of butter spread on it and then a little bit of the syrup drizzled over that... So. Good.

Oh, and in case you're wondering, the whiskey soaked raisins also did not have a strong whiskey flavor at all. But they were very moist, and I think the whiskey also brought out the raisin flavor more in the bread overall. 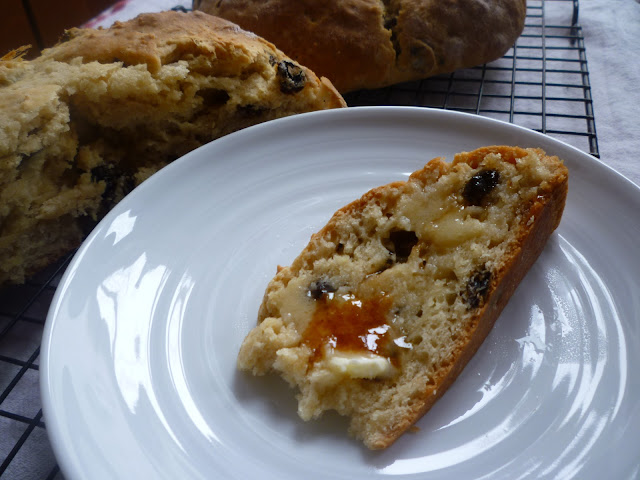 We're going to some friends' house this afternoon to have a whole meal full of St. Patty's Day foods, and I'll be bringing this second loaf with us. I can't wait to have many other Irish-themed foods today! 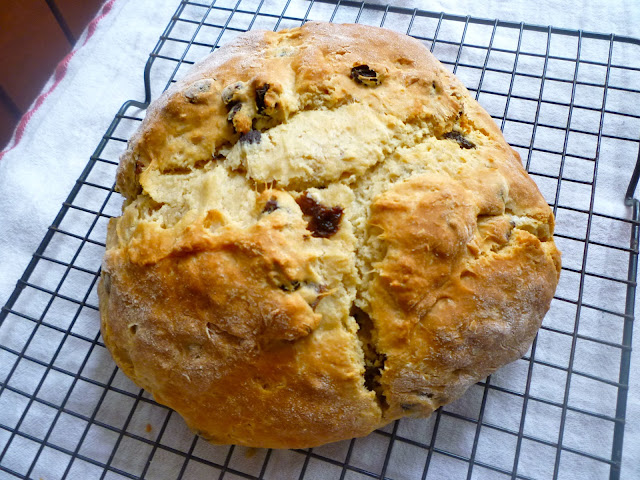 As you can probably tell, I didn't take photos of the bread until after we had already eaten part of one loaf. Oops. :) 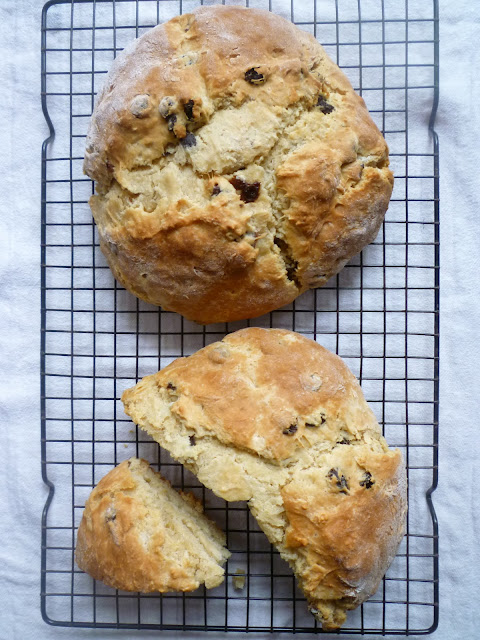 I just realized I've been blogging a lot of bread recipes lately! Beer cheese bread, English muffin bread, and now this Irish soda bread. Didn't even realize I was on a bread kick, but apparently I am! 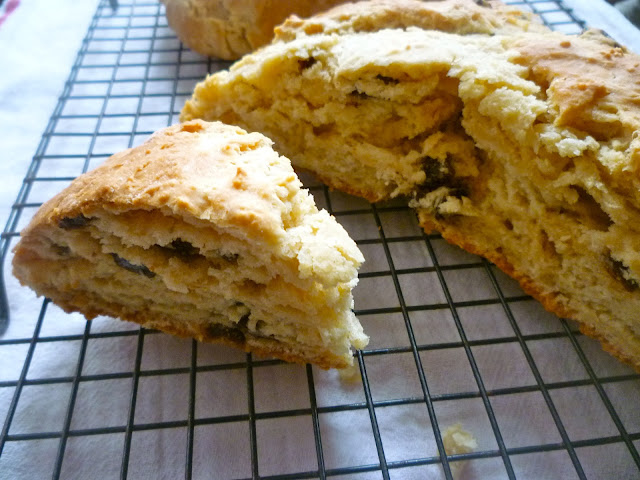