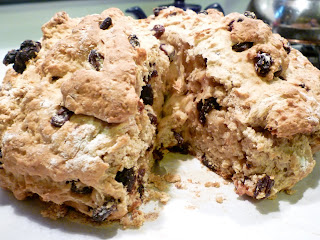 Well friends, it's that time of year for one of my favorite holidays, St. Patrick's Day! Making Irish soda bread has been a tradition that Megan (my roommate and cousin, for those of you who may not know!) and I have kept for the past few years. Personally, I really enjoy soda bread although I think it might not have the best reputation out there. I've actually heard mixed reviews...some people think it's a bit dry and bland, and then others loooove it. Well, I just so happen to be one of those people who love it! I find it to be a tasty, comforting food. And the soda bread I make is not dry, so I don't know what those people who think it's dry are thinking! ;-)
Irish soda bread is a great bread recipe because it requires much less work than a yeast bread, which usually needs several hours for rising and a lot of physical effort for kneading! Today, I used my Kitchen Aid mixer for about 90% of the work, and I had to put forth almost no "man power." It was a piece of cake...er, it was a piece soda bread, I mean. :) 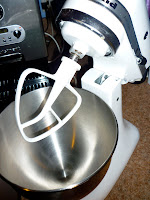 Alrightie, time to share the recipe! This year I tried a new recipe. I followed Ina Garten's recipe (she's the Food Network's Barefoot Contessa). It is quite delicious!! The recipe I used today can be found here, and a video of her making the bread can be viewed by clicking here. Her recipe gets a five-star rating, so it's gotta be good, right?
It was really a very simple recipe to make. It calls for normal ingredients, which, as you know, is always a bonus in my mind! The only thing I did differently today was instead of using the recipe's four cups of all-purpose flour, I used three cups of all-purpose flour and one cup of whole wheat flour. I am sure you could use half of each or maybe even make the majority of the flour whole wheat; it's your call! 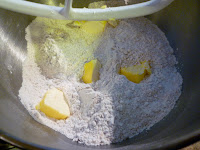 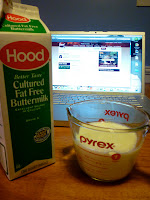 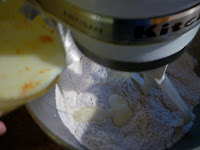 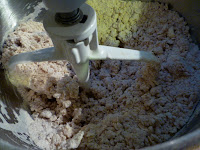 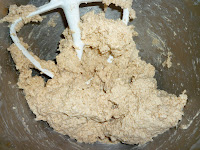 Here you have the mixture as it's starting to come together...and next you can see the consistency of the dough once it's all mixed. It is a pretty sticky dough, just to warn you! Next, you'll want to mix in the raisins (or currants, whichever you prefer). Ina recommends coating the raisins with a tablespoon of flour, which I did here as you can see. It apparently helps keep the raisins evenly distributed throughout the bread instead of having them sink to the bottom. Good tip, Ina! :) 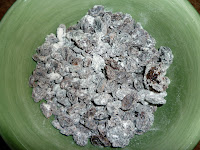 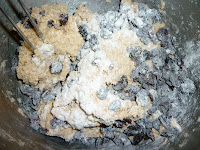 How do you deal with the sticky-ness of the dough? Well, I'd recommend flouring the surface on which you knead the bread...you don't have to knead it for long though, don't worry! As I mentioned earlier, that's one of the beauties of soda bread as compared to other breads. 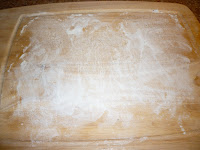 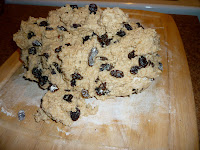 Here's the loaf, just before it's ready to go in the oven. Notice that I scored the top of it in a criss-cross design. This will help the bread cook through and help you be able to detect it's "doneness." 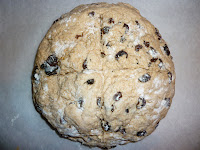 You can see the bread here as it's baking in the oven...looks sooo good! I love how it's just starting to develop that nice, golden brown color...it's about halfway through the baking time here. 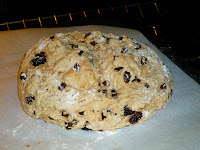 And here's the finished product. Love the look of this bread!! To me, it "says" comfort. :) 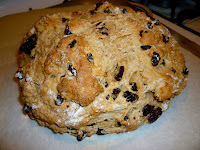 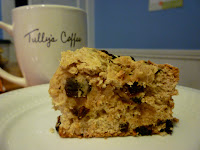 I enjoyed my first piece warm out of the oven without any "accessories" like butter or jam. I could eat it plain like that anytime, but I have also had it with butter, jam, and even a touch of honey. Deeelish! I'd recommend toasting it for a few minutes too if you're eating it a day or two after the original baking. After toasting, it'll seem like it came right out of the oven! I hope you'll try making soda bread soon too...and please let the Barbershop know what you think of it!
Posted by Colleen at Sunday, March 14, 2010