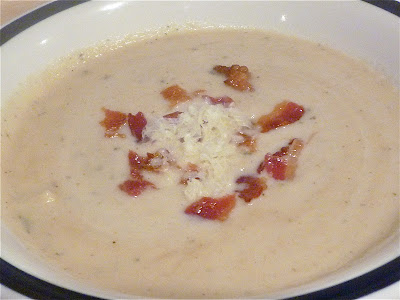 We all know the old saying, "don't judge a book by its cover." This saying can apply to so many situations, things, people, etc. in life. Well, I'm here to tell you that I think this saying should apply to this dish, roasted cauliflower cheddar ale soup. I don't know about you, but I don't think this soup looks all that appetizing... It's kind of a blah, gray-ish brown color. The bits of bacon and shredded cheese on top help its aesthetic value a little bit, but in general, I think we can agree that this is soup is not going to win any sort of beauty contest based on looks alone!

However, this soup would win a taste contest, I am sure of it. It was delicious! I cooked it this past Sunday night for Mike and me, and Mike loved it too and he actually doesn't care for cauliflower! I think that's one of the sure signs of a winning recipe - when someone who typically doesn't like the main ingredient in a dish actually wipes his or her plate clean. :)

This recipe is based on a recipe from Closet Cooking for Roasted Cauliflower and Aged White Cheddar Soup. I altered the original recipe slightly, and the ingredients and measurements I used are below. A couple points to note... The original recipe calls for 3 cups of vegetable broth. I used 2 cups of chicken broth and 1 cup of BEER! Yep. I couldn't resist. And honestly? I think I could taste the flavor from the beer in the soup! I was glad I experimented and added the beer. :) Also, I randomly didn't have an onion on hand (who am I?), so although the original recipe calls for onion, I did not add it. The soup was incredibly flavorful without the onion though, but I'm sure the onion would be a great addition. Oh, and this made four servings!

Preheat oven to 400 degrees. In a large bowl, toss the cauliflower florets with canola or olive oil until well-coated, and sprinkle with salt and pepper. Arrange the florets in a single layer on a baking sheet or in a 13 x 9 pan (to give you an idea of how much "2/3 of a large head of cauliflower" is, it filled a 13 x 9 baking dish for me). Roast for 20 to 30 minutes, or until the florets are lightly golden brown.

In a large pot on stove over medium heat, heat a couple teaspoons of olive oil and saute garlic for 1 to 2 minutes, until fragrant. Add the broth, beer, cauliflower, and dried herbs, and bring to a boil. Reduce heat and simmer, covered, for about 20 minutes. Using a stick hand blender (if you have one), puree the soup until it reaches your desired consistency. If you don't have a stick hand blender, you could puree the soup in a regular blender in batches and then return it to the pot.

Mix in the shredded cheese until it's melted, and then stir in the milk or cream. Remove from heat and serve. Add salt and pepper to taste, if desired. Also, you could add crumbled bacon like we did for extra flavor and a little crunch! 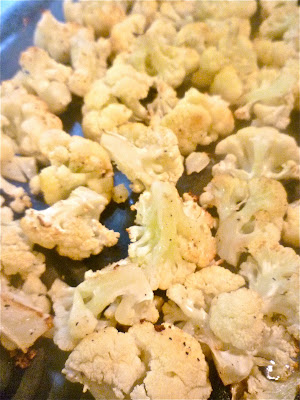 The reason I used Smuttynose pumpkin ale is simply because I had one bottle of it from the fall still (why I hadn't drunk it yet, I don't know! it's a good pumpkin beer :)). And as I said earlier, I really think I could taste a hint of the beer in the soup... 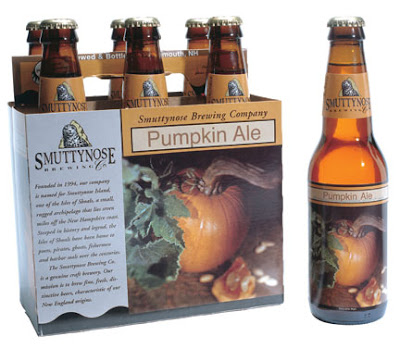 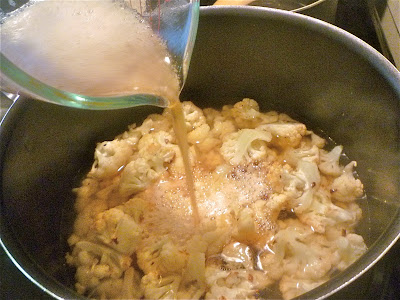 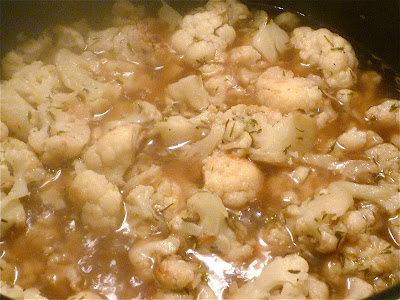 To puree the soup, I used my handy dandy Cuisinart stick hand blender. It worked fabulously! But no worries if you don't have one; a blender or food processor should also do the trick. 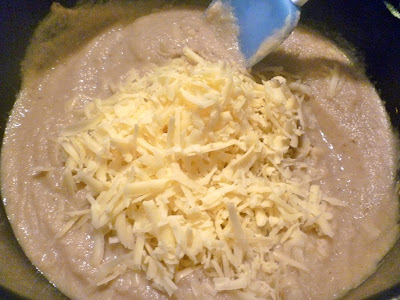 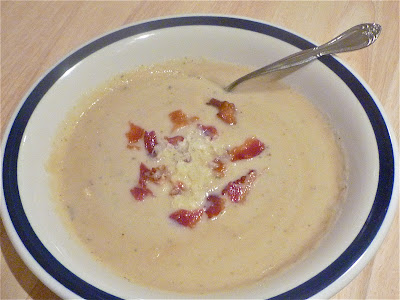 Another great characteristic of this soup is that it's very filling! I was totally full after one serving and didn't feel the need to go back for seconds. The leftovers worked nicely as my lunch at work the next day too!

Do you know some of the great nutritional benefits of cauliflower??! It is super high in Vitamin C (one serving = 67% of your daily requirement), a great source of folate, high in fiber, has many cardiovascular disease-fighting characteristics, and is low in calories. Awesome!