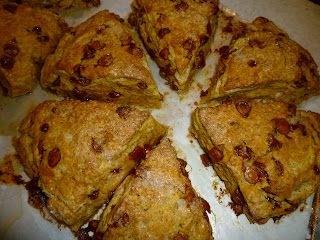 You should know that I'm about to share with you my favorite recipe I've made so far this fall. I am in LOVE with these pumpkin scones. Now don't get me wrong... I'm also very fond of the other fall recipes I've made this year so far...pumpkin bread, butternut squash apple soup, apple crisp, butternut squash quinoa salad, apple cider donuts, etc. They're all wonderful! But there's something about these pumpkin cinnamon chip scones that hasn't let me stop thinking about them since I made them a couple weeks ago. :-D
Scones, unfortunately, often get a bad "rap" about being dry and lacking in flavor. So not true! For those who think that, they must not be using the right recipe for their scones or they're not buying them from the right bakery. Scones can be incredibly delicious! I promise. ;-)
I found this recipe on the King Arthur Flour blog. If you haven't ever checked out their blog, you definitely should. The recipes they made always look so good!! Check out the KAF (King Arthur Flour :)) pumpkin scone recipe here.
Now, some pictures for your viewing pleasure... 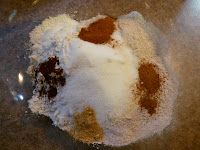 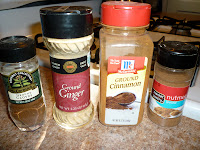 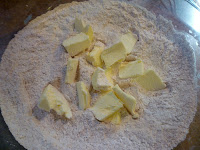 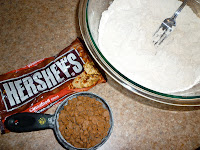 The recipe calls for one to two cups of cinnamon chips, chocolate chips, crystalized ginger, or the addition of your choice... I used just one cup of cinnamon chips (which are so delicious if you've never had them!). One cup was plenty! Two cups would have been too much, I think. White chocolate chips or dried cranberries/craisins might be yummy additions too. 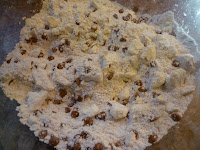 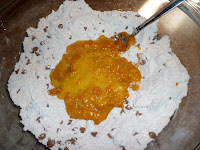 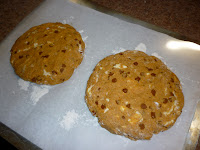 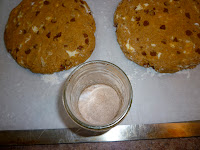 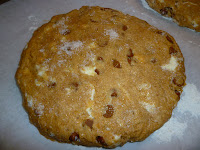 If you look closely, you can see the cinnamon sugar! 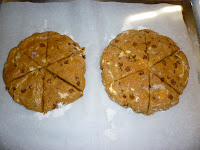 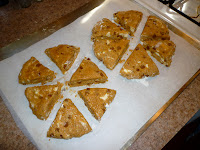 The recipe made 12 scones, as you can see. They were pretty big in size though; I could have cut them smaller, but it was simple just to cut each round of dough into six slices. You can always cut them smaller after they're baked! 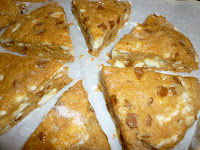 The raw dough before it's baked... Check out those chunks of butter. 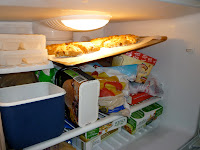 The recipe says to put them in the freezer for a bit before baking. KAF says to do this for "the best texture and highest rise." 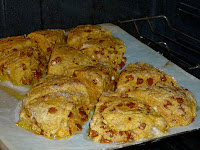 There are the beauties, in the oven! 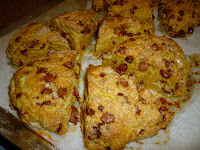 Fresh out of the oven. Don't they look delicious?!? 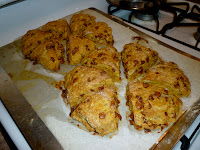 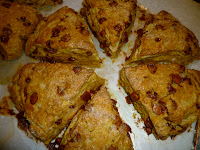 My mouth is watering as I'm writing this... 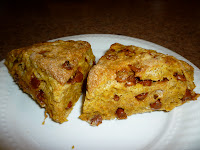 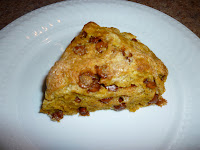 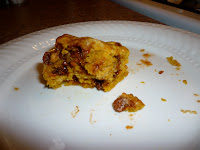 I was sad when I only had a couple bites left. :(
This recipe will definitely be a "go-to" fall breakfast recipe for me (or any season of the year really!). I hope you will try it and have the same feeling! Would love to hear your thoughts if you do. ;-)
Posted by Colleen at Sunday, November 14, 2010