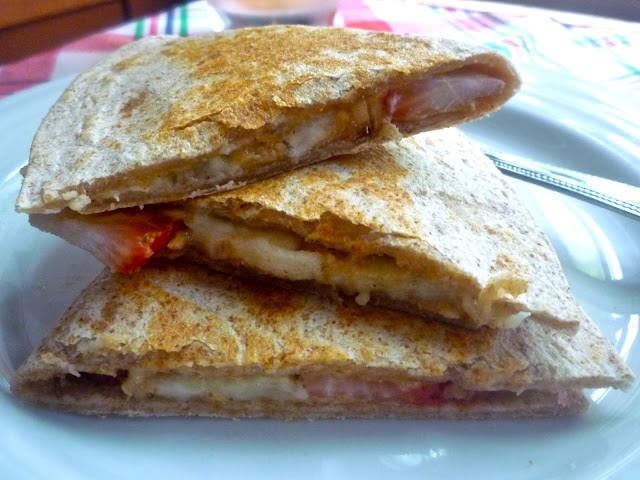 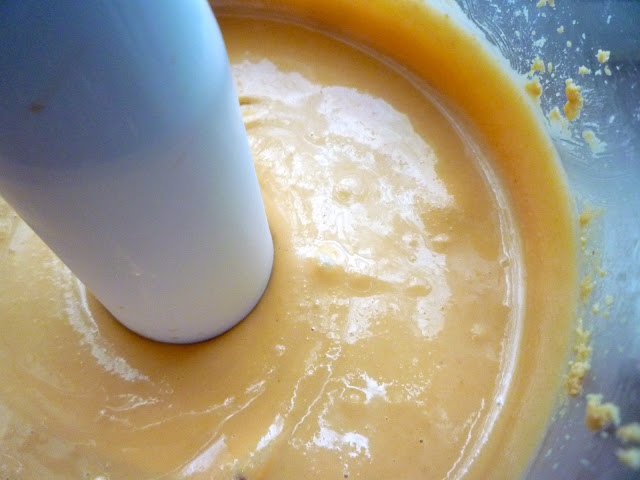 A little while back I decided to make my own variation, so I tried my hand at a maple cinnamon flavor. And it turned out very well, I thought! Another flavor combo to keep in the peanut butter rotation. :)

And with the maple cinnamon peanut butter, I also made a delicious snack of a banana strawberry peanut butter quesadilla. A healthy snack that takes about 10 minutes start to finish, it's a great after school (or after work) or weekend afternoon snack option. :) Below are the recipes for both the peanut butter and the quesadilla.

-1 and 1/4 cups roasted peanuts (unsalted)
-2 to 3 tsp. pure maple syrup
-1/2 to 1 tsp. cinnamon (regular or Vietnamese), depending on how strong a cinnamon flavor you'd like
-salt to taste (optional; I don't think you need much more than 1/4 to 1/2 tsp. if you use it and personally, I don't think you actually need the salt at all :))

Put peanuts in food processor. Turn processor on and get the peanuts going. With the machine on, add the cinnamon (and salt, if using) through the shoot. Continue to process for probably about 3 to 5 minutes or until peanut butter is smooth. Turn the processor off and scrape down the sides. Turn the processor back on, and while it's running, add the maple syrup. The addition of the sugar will mess up the consistency of your peanut butter at first; it will become less smooth and almost chunky. Be patient though; as the processor continues to run, it will smooth itself out and become a more cohesive mixture. This may take 3 or 4 minutes. You're done when it reaches your desired consistency!

Store in airtight container in fridge. When ready to use it, let sit at room temperature for 10 to 20 minutes to let it soften. Makes about 2/3 to 3/4 cup peanut butter. 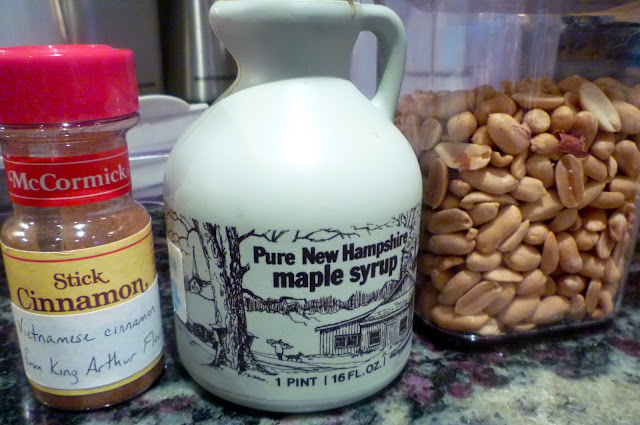 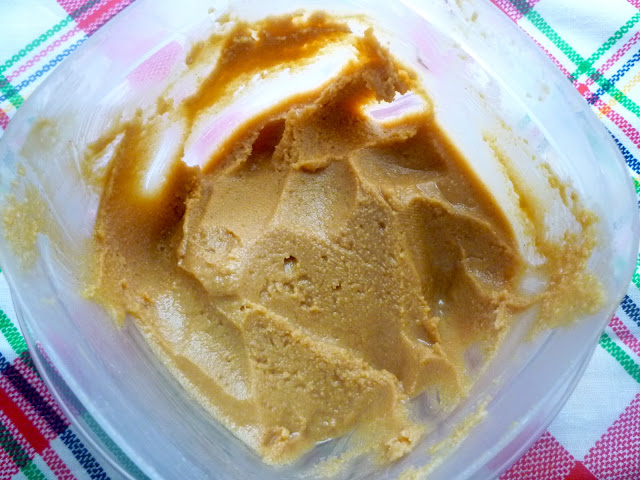 The maple flavor in this recipe is subtle, but there. The cinnamon flavor is a bit more pronounced. All in all, it is a fun, new flavor to try for homemade pb!

With tortilla flat on a plate, spread peanut butter evenly over half of it or so. Layer sliced strawberries and bananas on the peanut butter, being careful not to put the fruit all the way to the edge of the tortilla. If desired, sprinkle a dash of cinnamon over the fruit. Fold tortilla in half (by folding the empty side over top of the side with the fruit). Lightly butter the side of the tortilla that's facing up.

Heat non-stick pan or skillet over low-medium heat on stove. Place the quesadilla, buttered side down, on the preheated pan. Cook for 3 or 4 minutes, or until the bottom side becomes golden brown (use a spatula to lift up the tortilla and peak underneath it to see how browned it is). While the first side is cooking, lightly butter the other side of the tortilla you haven't yet buttered. When the pan-down half reaches your desired golden brown color, carefully flip the quesadilla and cook the other side, for another 3 or 4 minutes. Once both sides are cooked to your liking, remove from heat and place on plate or cutting board. Cut into thirds with a sharp knife. Serve warm and enjoy! 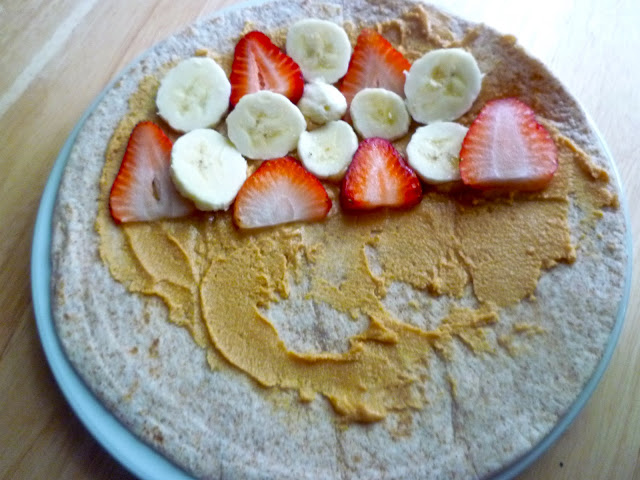 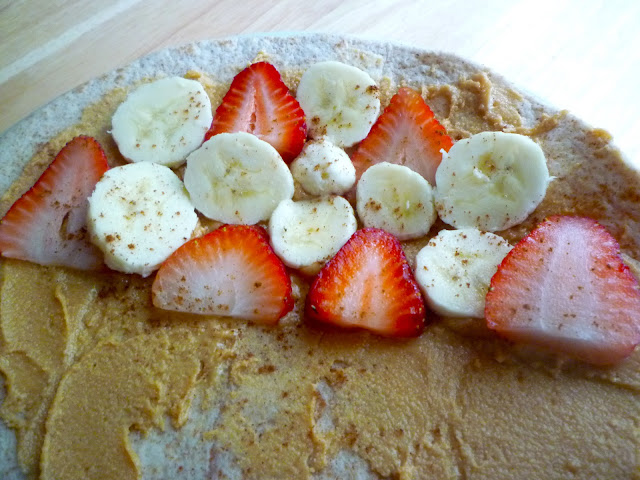 The fruits really add a nice sweetness to the quesadilla. It makes it almost dessert-like. I'd say this could easily be eaten for breakfast, a snack, or dessert... Or heck, even lunch or dinner. ;) 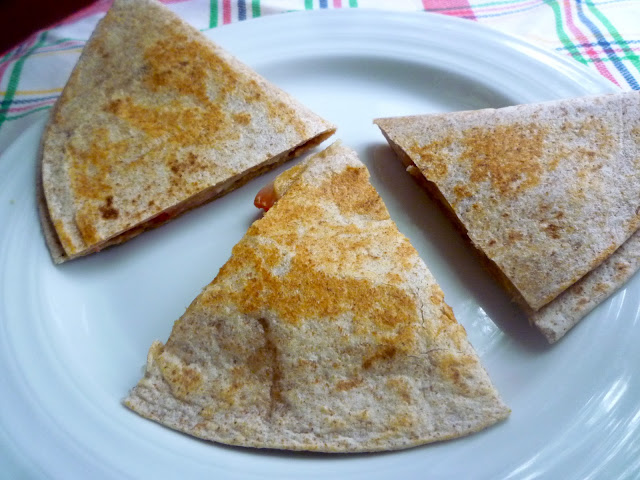 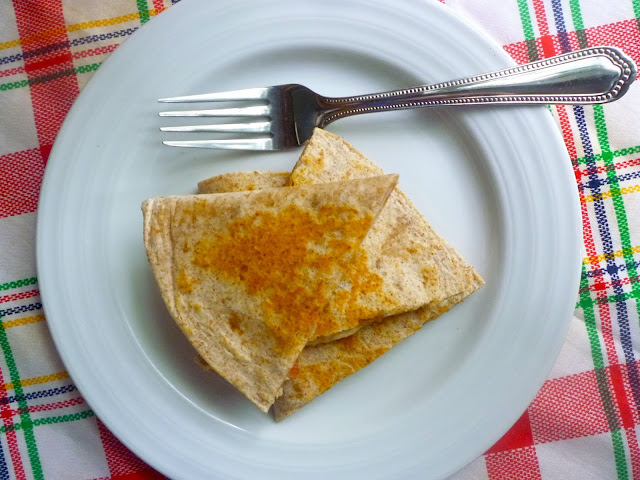 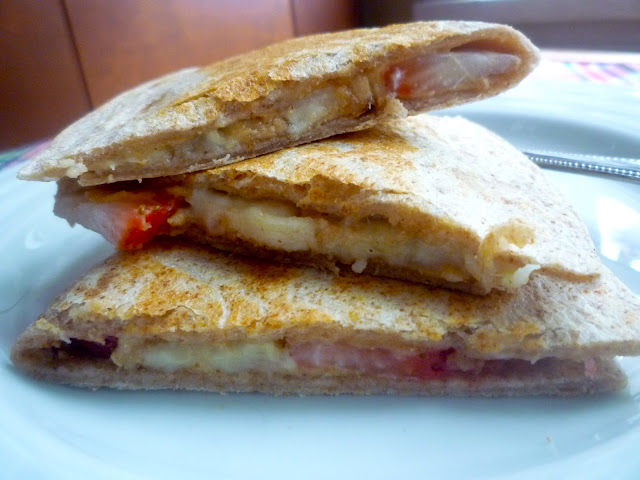 I loved how the inside of the quesadilla was warm and gooey. Just what you want in a quesadilla of any kind! The inside was a nice contrast to the outer tortilla, which was slightly crisp from the browning on the stove. 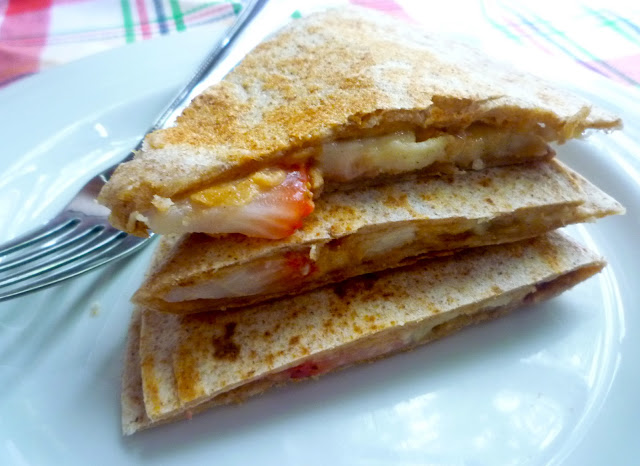 I think this would be a really fun snack for kids...but it's also perfectly suitable for adults, of course. :) 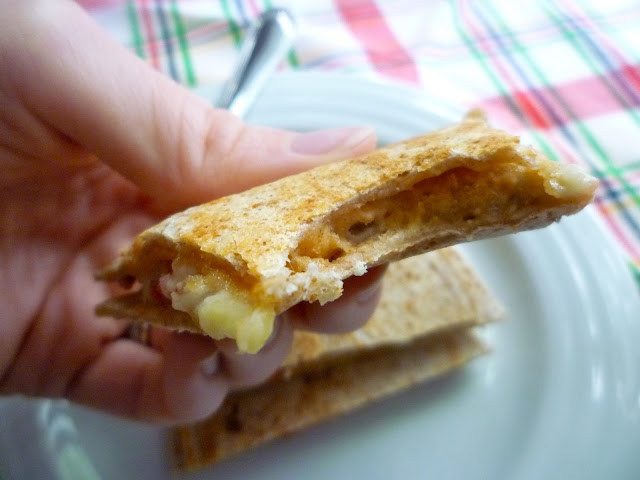