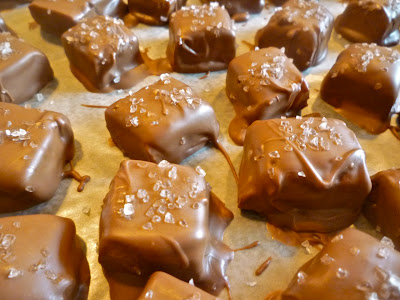 Every year for the past 6 or 7 years, in early December I've been taking part in "Willy Wonka" day with a few ladies, a couple of whom are coworkers and close friends of mine. We spend a solid 9 or 10 hours making tons of candy, and then we box it all up to give to friends and family as gifts for the holiday season! It's become a fun yearly tradition, and let me tell you, all my friends and family reeeeally look forward to receiving their boxes of candies each year. ;)

This picture is of a box from this year's Willy Wonka day. As you can see, there is quite the variety of delicious treats in that box!! 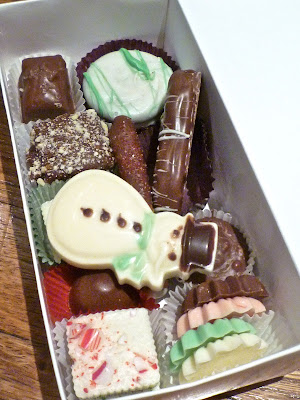 Today though, I am going to share with you one specific recipe for a candy that has become a staple in the candy boxes - the sea salt caramels. These are SUCH a hit with the recipients of the candy boxes! And they are definitely one of my favorites too. This year I had the privilege of making the caramels. Lucky me!!

Below are the ingredients and instructions, and then I have some pictures for you to show the process. It's a bit intimidating at first, but it's honestly not that difficult, I promise. I was nervous when I made the first batch, but they came out great, and I was all set to make the second batch without any intimidation whatsoever.

**Be sure to measure all your ingredients ahead of time and have them ready to go before you begin! Once you start this process, you can't really stop. ;) Oh, and beware that your kitchen is going to smell awesome while the caramel is cooking on the stove.

Line a 9" square pan (an 8" pan would be okay too) with foil or parchment paper and spray with cooking spray. In a 2 or 3-quart sauce pan, bring the cream to a boil. Add all sugars (sugar, corn syrup, and honey) and return to a boil. Using a candy thermometer, cook until the mixture reaches 257 degrees Fahrenheit, stirring very frequently. Remove the pan from the heat, and add the butter, vanilla, and two teaspoons of the sea salt; mix well until all ingredients are incorporated. Pour the mixture into the prepared pan and cool.

This next part is hard to explain since it wasn't written down... But you'll want the caramel to cool to an extent. You don't want it to harden all together, but you need it to harden somewhat before you can score it with a knife to mark where you'll eventually cut it into squares. It should be a soft caramel when you score it, but not so soft that the scored marks "bounce" back and disappear after you score them, if that makes sense. And eventually, after scoring, you can remove the foil or parchment from the pan and cut the caramel into squares all together, when it's hard enough and not as soft and sticky... The pictures below will help, I think.

When the caramels are completely cooled and cut into squares, melt your chocolate. You can use whatever type of chocolate you'd like here, but I think milk or dark would be best. :) And you can use baking squares or chips, or you could use candy melts that you'd buy at the craft store. Melt the chocolate using whatever method you're most comfortable with (double boiler, microwave, etc.).

Line a baking pan or cookie sheet with wax or parchment paper. Using small tongs, dip each caramel in the melted chocolate and then place on the lined baking sheet. Immediately sprinkle the top with a dash of the remaining sea salt. Let the chocolate harden completely, and enjoy!! 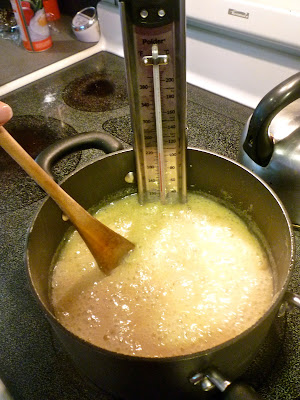 Just so you know, it's not that easy to take pictures while caramel boils on the stove! 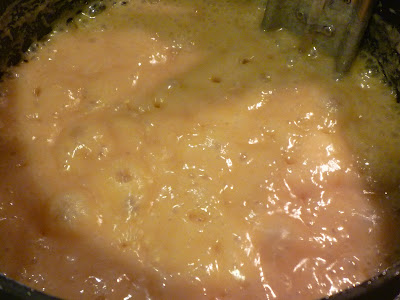 When the cream and sugars are boiling, the mixture will rise in the pan quite a bit and come to a strong boil. You may need your heat on a medium or high heat to make sure it reaches the right temperature. And if it takes a while to get there, don't worry. Eventually it will, and when it does, it will happen very quickly! So keep a close eye on your thermometer. 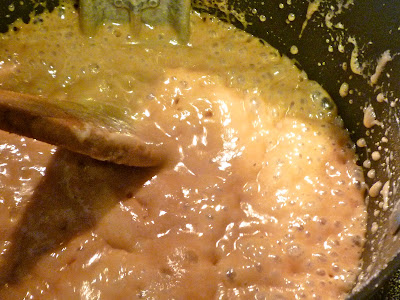 The photo below is when I took the mixture off the stove and added the butter, vanilla, and salt. 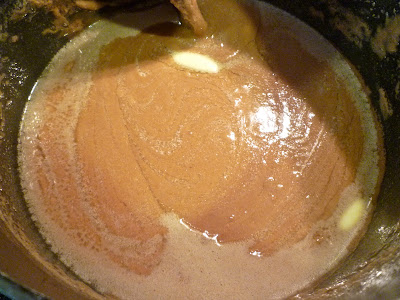 Next, the mixture is poured into the prepared pan. We used a spatula that had some chocolate on it to spread it. No big deal; it was going to be covered in chocolate later anyway! 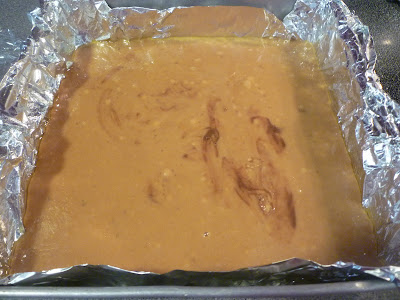 This is when I scored the caramel to make the marks for cutting it later. You'll want to score the caramel both directions in the pan (the photo below only shows the score marks one way). 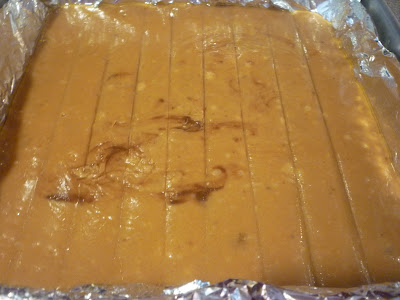 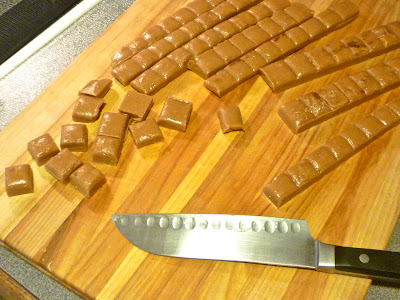 My little "station" for dipping. Caramels, melted chocolate, and sea salt! Does it get much better than that?! 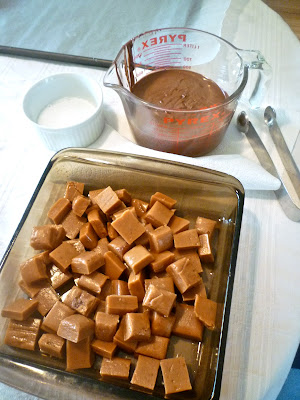 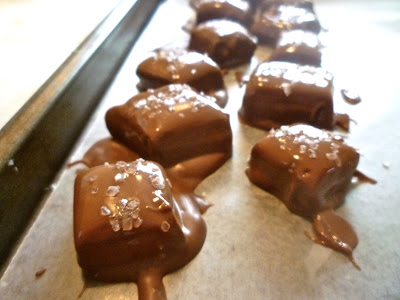 In order to not have too much chocolate coating the caramel, after dipping it in the melted chocolate, it's best to tap the tongs on the edge of your bowl or dish to get rid of the excess. And if you still have extra chocolate around the caramel, you can cut it off with a knife (if you want nice, even looking caramels). 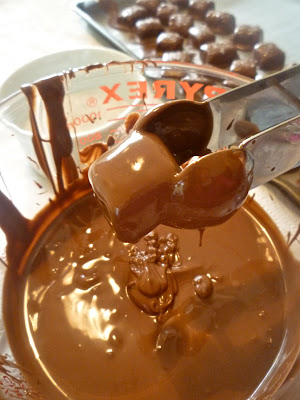 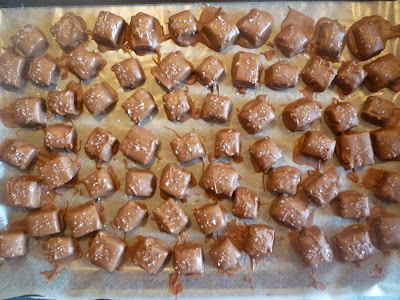 Each caramel then received its own individual paper cup before the boxing process began. I pretty much just wanted to take all of these home with me...to heck with everyone else and their candy boxes. ;) 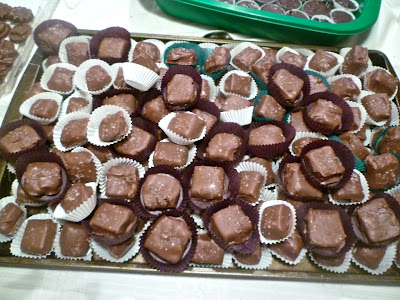 A sampling of other candies that went into the boxes... 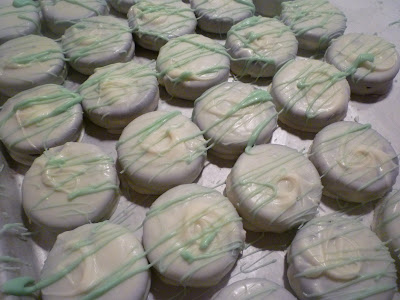 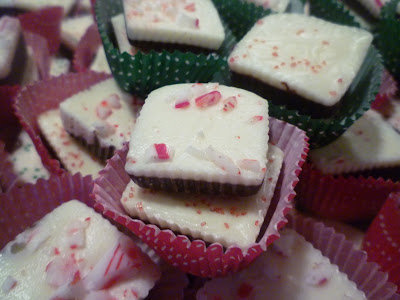 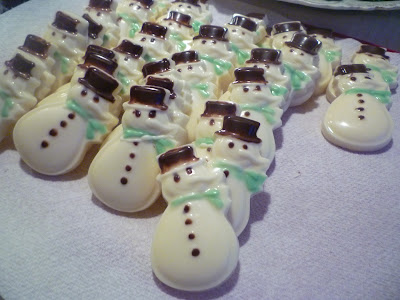 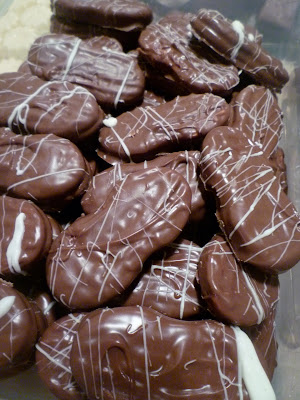 And a bunch of other items... There's toffee, chocolate covered pretzels, and several others! 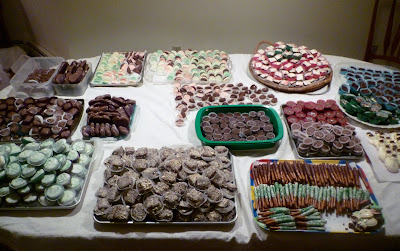 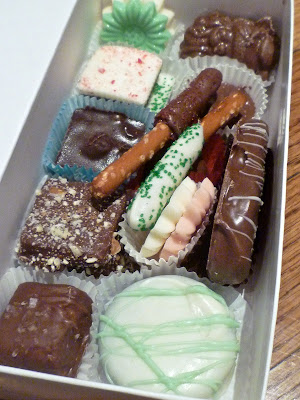 I wish I could send each of you one of these boxes!! 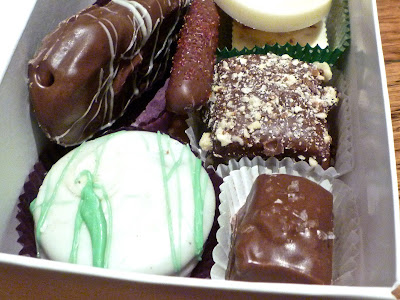 These chocolate covered sea salt caramels are a perfect treat around the holidays. You should totally think about making them to give to your family and friends too!

And one more thing... Is it really DECEMBER already??!

Will be back later this week with another recipe for you!