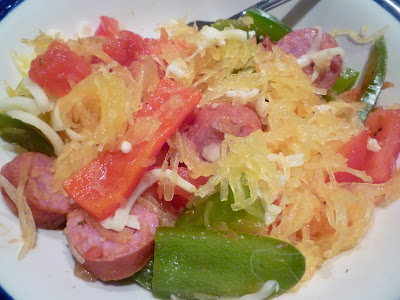 I eat a lot of veggies. I loooove them. When Mike and I cook together, we tend to cook a lot of veggies, and I feel really lucky to be marrying someone who enjoys healthy, nutrient-rich foods like veggies! Sometimes we get in a rut though with our veggies... We most often roast veggies, and we also eat many of the same types of veggies over and over. Now, don't get me wrong; I'm not complaining! We still incorporate a large variety of veggies in our diet (and we especially did this with our awesome CSA this summer/fall!), but every now and then I realize our meals have become a bit redundant, and that's when it's time for a change. This time, spaghetti squash was that change! I've read other bloggers' recipes using spaghetti squash, but can you believe that I've never actually cooked it myself? Uh oh! So when I saw spaghetti squash on sale at Whole Foods last week, I figured it was about time that I gave it a shot. :) 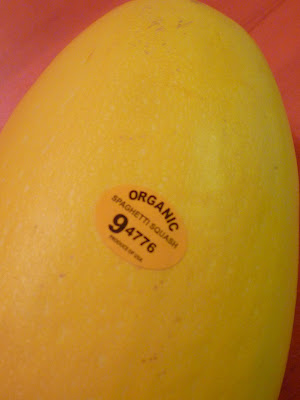 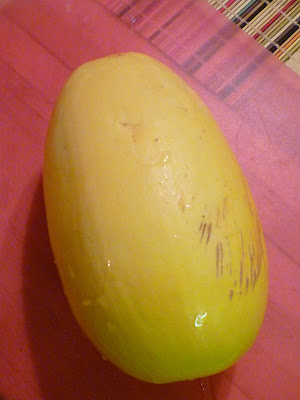 The method I used to cook the squash was from Emeril on the Food Network. It's so simple (I didn't follow his entire recipe though - just the part for cooking the squash)! All I did was cut the squash in half lengthwise and put both halves, cut side down, in a baking dish with some water (about 1/2 inch of water in the bottom of the pan). Then I covered it in aluminum foil and roasted it at 400 degrees (although Emeril says 375) for about 45 minutes. When there was about 15 minutes left in the roasting, I flipped each half over so that the cut side was up, returned it to the oven covered with foil, and continued to roast it for the last 15 minutes. After the full 45 minutes, when I took the squash out of the oven and tested for doneness, it was perfectly tender and ready to go! 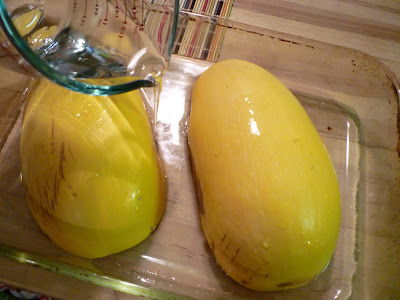 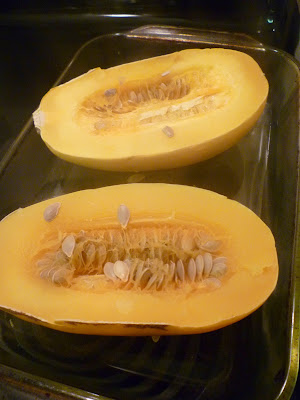 Here's the squash, straight out of the oven. 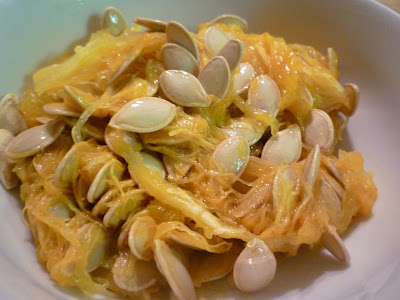 Make sure to discard the seeds! 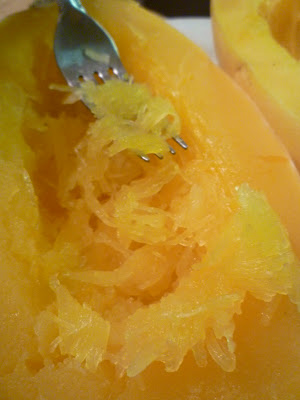 To remove the squash from the peel, simply take a fork and pull the strands of squash (you know, the "spaghetti") away from the skin. It pulls away so easily! It was really fun to remove the squash. It was like popping bubble wrap or something. There was something really satisfying about it for some reason. 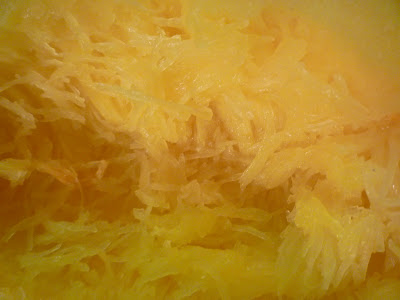 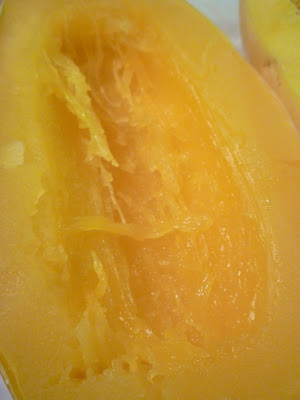 I peeled both halves all the way down to the squash's skin. I got every last strand of spaghetti, let me tell you!! I should have taken a picture of the empty skins. :) 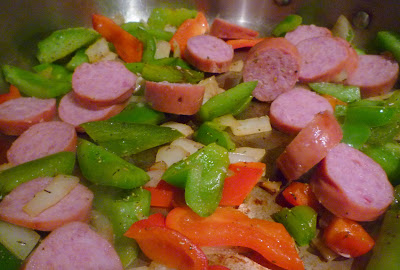 To keep the meal super simple, we decided to just saute some other veggies and kielbasa (with olive oil and spices - herbs de provence, s & p) and put everything over top of the spaghetti squash. 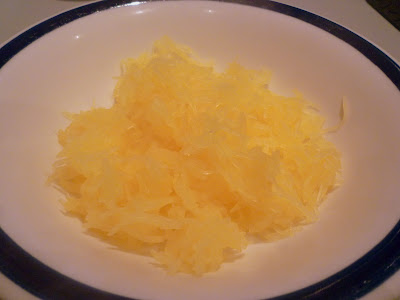 Then we mixed it all together... 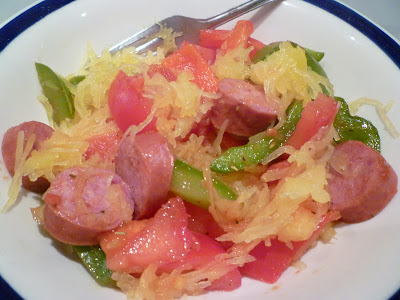 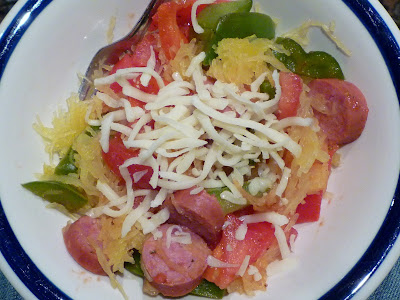 And voila, we have an easy, healthy dinner!!

I like how you can see the strands of "spaghetti" here. :) 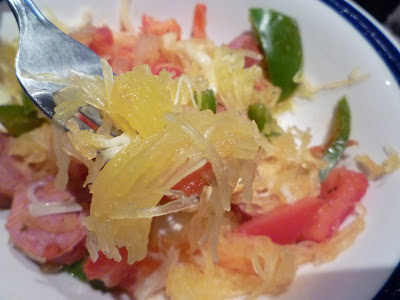 I loved my first experience of cooking spaghetti squash! If you're a spaghetti squash novice like I was until last week, I'd highly recommend it. If you're a fan of squash in general, you'll love it. It's so easy to cook and it tastes delicious too!! And if you're a pasta person but you're trying to cut back on carbs, this squash is the perfect substitute for actually spaghetti or any other pasta really!
I found a few other spaghetti squash recipes that look really healthy and tasty and have posted them below for you. YUM!!
Herbed Spaghetti Squash from Emeril
Spaghetti Squash and Pork Stir-Fry from Eating Well
Spaghetti and Spaghetti Squash with Lemon Garlic Sauce and Ricotta from Eats Well with Others
Spaghetti Squash Lasagna from Skinnytaste
Roasted Shrimp with Spaghetti Squash from Martha Stewart
I'll be back in a couple more days with my last Holiday Edition of Friday Favorites before Christmas! Be on the lookout early though; it may be appearing on Thursday. ;)
Hope you're all having a great week!
Posted by Colleen at Tuesday, December 20, 2011