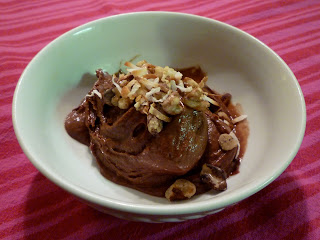 We're sloooowly getting into the warmer spring months here in Boston, and this past weekend was one of the best we've had in quite a while weather-wise. What did that make me think of? Ice cream!! I've read many recipes on several blogs for homemade ice cream; however, the trouble is that many of these recipes require an ice cream maker! And that's one kitchen gadget that I don't have (one of very few - I have many kitchen gadgets and appliances, folks!). So, when I recently came across an ice cream recipe that did not require a machine, I was psyched!
You know what else is neat about this ice cream recipe? It's vegan! I personally do not eat vegan, but for anyone out there who does, this is a fabulous recipe. :)
The list of great things about this recipe goes on and on. I just thought of something else. There are only three ingredients to make this ice cream! Yep, you heard me right. Three things. What are they?
~ bananas, peanut butter, cocoa powder ~
Onward!
The recipe can be found here at a site entitled Clean Green Simple. It's such a great site! If you click on the link there, you'll see that she has three recipes actually...berry blend ice cream, peanut butter chocolate ice cream, and butter pecan ice cream. Obviously I made the peanut butter chocolate one. ;-) All three of these recipes are vegan, gluten free, low fat, and sugar free. Neat!


Here's the recipe for easy viewing on my site too:


Ingredients:
-2 bananas, sliced then frozen (note that it says slice then freeze. Doing it the other way around is much more difficult.)
-3 Tbsp creamy peanut butter
-3 Tbsp cocoa powder
-1 tsp agave nectar (optional)
Directions:
Blend bananas, peanut butter and chocolate together in a food processor until smooth. Depending on how frozen your bananas are, it may go through a crumbly phase – just scrape down the sides of the bowl and keep blending and it will smooth out. Add agave nectar to taste. Top with chopped peanuts and chocolate, if desired. 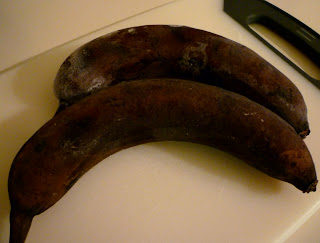 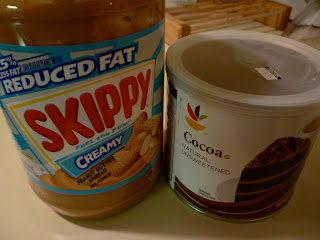 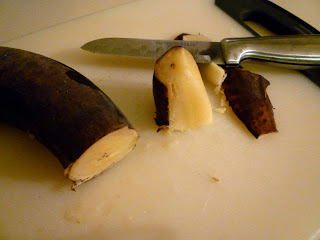 Cutting up the bananas! It might be easier to cut the bananas prior to freezing them, but I clearly didn't do that... I had these bananas frozen in my freezer for a couple weeks (long before I decided to make this recipe!). 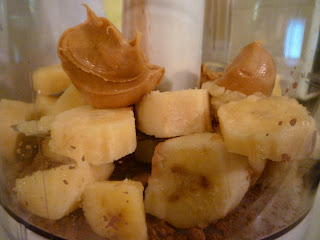 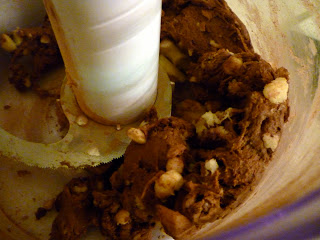 Everything's starting to come together... 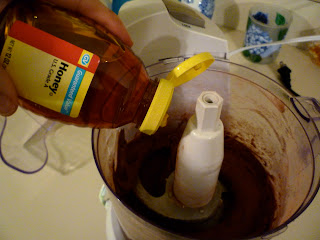 I added literally about three drops of honey (maybe 1/2 tsp. total). I don't think it made any difference in the taste, so if you try making this, I think you can omit it. The recipe calls for agave nectar, but I don't have that on hand so I added a touch of honey since they're apparently similar! 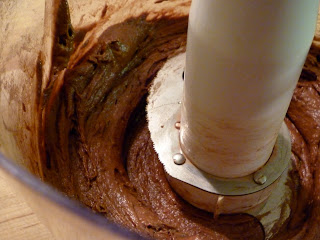 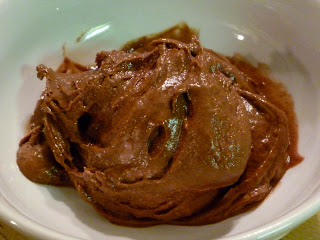 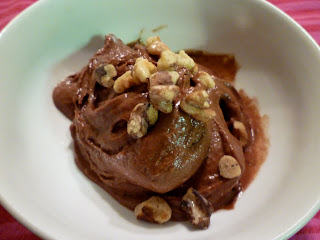 I thought it'd be fun to add some toppings, so I toasted a few pecans and some coconut and topped my serving with those. :)

I really enjoyed this "ice cream"!! I'd say its consistency was in between soft ice cream and hard ice cream. It wasn't quite as soft as the soft serve you'd get in a twist cone :), but it also wasn't as hard as the ice cream you'd buy in a half gallon to have in your freezer! The banana flavor was present, FYI. I realize the name of this ice cream is chocolate peanut butter, not chocolate peanut butter banana. It really is the chocolate and peanut butter flavors that dominate though! Mike tried this too, and he really enjoyed it as well. It was so refreshing (literally and figuratively!) to eat something so simple, healthy (for the most part), and delicious. Such a tasty treat! I hope you'll try it! :)
Posted by Colleen at Tuesday, April 12, 2011