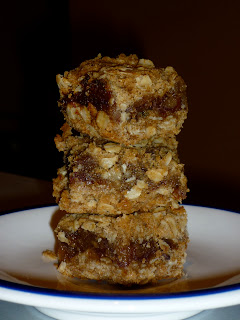 I have a confession to make. I have become obsessed with dates. Noooo, not the romantic kind (although that kind of date is obviously nice too! haha). I am obsessed with dates, the fruit! For the last couple months they have been a staple in my kitchen. In fact, I've been buying them in bulk at BJ's because I have been eating them so much! Did you know that dates are packed with all sorts of good nutritional value? Some highlights include that they're high in fiber, low in fat, high in potassium, easily digested, and are a great source antioxidants...and due to all these great qualities, they may help fight cancer, lower blood pressure, and lower the risk of digestive disorders. However, they are slightly high in calories (not too bad though), so be sure to enjoy them in moderation! You can read more about the nutritional benefits of dates here and here. Of note, I just noticed that the first of those two sites says that dates are low in calories, but the second one says they're high in calories. One date is about 25 calories or so...for a low-calorie, energy boosting snack, you can definitely enjoy four or five dates. Just don't eat 15 or 20 at a time, I guess!!
Phew! I didn't mean for that to be a science or nutrition lesson. :-P


Back to business...the bottom line is that I am lovin' dates these days! Lately, I've mainly been eating them as a snack at work or for a burst of energy before heading out for a run. However, I recently thought to myself, I really should bake some sort of delicious treat with dates! So I did. ;-)
I don't remember how I came across this recipe for date bars (I actually wasn't on the hunt for a date-related baking recipe at the time), but I'm glad I found it! You can check out this "keeper" of a recipe here on a blog called "Miss Anthropist's Kitchen."
All in all, this was a pretty simple recipe. The most time consuming part was chopping the dates. If you look at the recipe, you'll notice that it calls for 3/4 pound of pitted dates. What does that mean in terms of typical baking measurements?! Well, I do not own a kitchen scale, so I just took a guess! I made this recipe with two cups of chopped dates, and it seemed to work out perfectly. The huge bag of dates from BJ's that I have is 40 ounces, which is 2.5 pounds, so I chopped up what I estimated to be about 1/3 of the bag....or slightly more than 3/4 pound. And that ended up being the equivalent of two cups after I chopped them. Maybe not the most scientific method, but it worked!
It's time for the part when you can take a break from reading my rambling and look at some pictures. :) 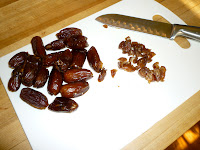 DATES! How I love thee. 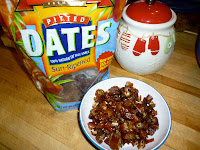 Roughly two cups of chopped dates are in that bowl... 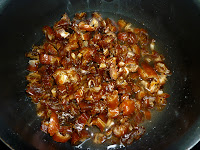 Time to cook them on the stove! This was what they looked like when they began cooking. 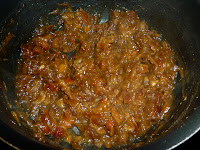 And here they are, ready to go in the baking dish....much "mushier" than when they began cooking. 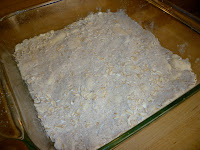 Layer of dry/crumbly ingredients on the bottom... 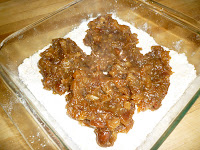 Next comes the layer of the date mixture! 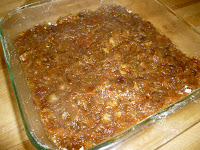 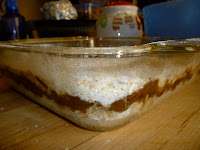 And finally, one more layer of the dry/crumbly mixture. 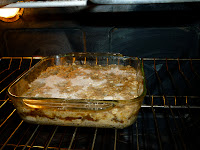 In the oven! My photo wasn't exactly centered. Whenever I open the oven to take a picture, I make it quick and clearly don't pay close attention to whether my item is centered! 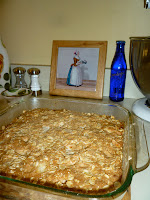 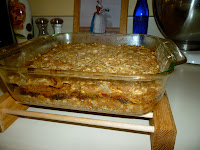 Check out those layers! 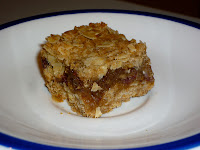 Here's a nice close-up view of the layers!
A few thoughts on these layered oatmeal date bars. 1) They're delicious and nutritious! Sure, there are a few ingredients in them that aren't the best for you, but I think they're much more of a guilt-free dessert than many other bars out there!  2) The date layer is the middle is SO tasty...and the top and bottom layers are darn good too! At first, I was afraid that the crumbly mixture was going to be too dry and crumbly. As it turns out, it wasn't. However, next time I make these, I think I'll try experimenting with putting less flour in the recipe (maybe just 1 cup instead of 1.5 cups?). I think I'd keep the quantity of oats the same though.  3) I did not use any applesauce in place of some of the butter, like "Miss Anthropist" did. Maybe next time! I did use half all-purpose and half whole wheat flour though. Also, I added about two tablespoons of brown sugar early on when the dates were cooking on the stove. Then, when they only had a couple more minutes to go, I added a couple tablespoons of flour to thicken the mixture. 4) I greased my baking pan. The recipe doesn't explicitly say to do that, but I decided to...not sure that the bars would have stuck if I did not grease the pan, but they definitely didn't stick after I greased it, so I say go ahead and grease the pan - just lightly is fine.  5) I have had at least one of these bars every day since I made them... And I think I'll be continuing my love affair with dates into the future. ;-) 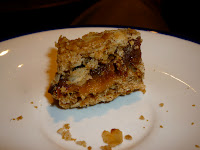 So long for now from the Barbershop!
Posted by Colleen at Wednesday, January 26, 2011