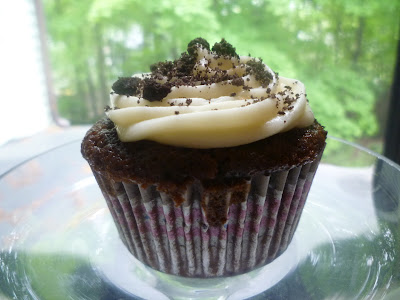 Helloooo! Hope everyone is having a nice, long weekend. And on this Memorial Day, please don't forget to honor and remember the men and women who have made the ultimate sacrifice for our country. As a professional who works with veterans, I feel very lucky to work with our country's heroes each and every day. So if you haven't yet, make sure to take a moment and remember our fallen heroes today.

As you know, last Monday evening I participated in Cupcake Camp! It was a super fun experience, and I look forward to hopefully participating next year too!

Before I share a more extensive recap of the event than the quick recap I shared last week, first I'd like to share the recipe for the cupcakes that I made: Oreo-stuffed chocolate stout cupcakes with kahlua cream cheese frosting. 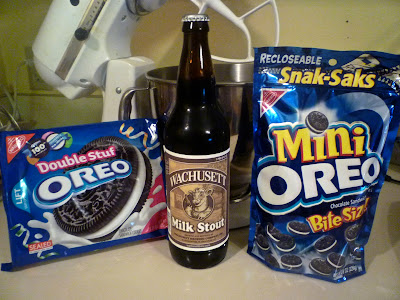 This recipe is a combination of two previous recipes I've made, my chocolate stout cupcakes and my Oreo-stuffed chocolate cupcakes. When I made both of those recipes, I topped them with a deeelicious kahlua cream cheese frosting, which might just be in my top three of all-time favorite frostings. It's always been a big hit!

Here's the final recipe I brought to cupcake camp. The cupcake recipe is originally from Dave Lieberman of the Food Network. I followed it almost exactly. The only change I made was a substitution of yogurt for sour cream.

Preheat oven to 350 degrees. In a large mixing bowl, whisk together the cocoa powder, sugar, flour, baking soda, and salt. In another large mixing bowl, combine the beer, melted and cooled butter (it might curdle; don't worry if it does!), and vanilla. Beat in the eggs, one at a time. Mix in the yogurt until thoroughly combined and smooth. Gradually mix the dry ingredients into the wet ingredients, mixing until well incorporated.

Grease 24 muffins tins, or line with cupcake liners (you can use large or mini muffin pans here, or both - your choice!). Spoon cupcake batter into cups, filling about 1/3 of the way full to start. Next, place one full Oreo (a regular Oreo or mini Oreo, depending on your pan) on top of the first layer of batter. Spoon more batter into each cup until each cupcake liner, large or mini, is about 3/4 of the way full. I show pictures of this "Oreo stuffing" process in this post.

Bake the large cupcakes for about 16 to 20 minutes, or until the tops are domed and a toothpick inserted into the center comes out clean. For mini cupcakes, check them for doneness after 10 to 14 minutes. Let cupcakes sit in pan for 3 to 5 minutes before removing to cooling racks to cool them completely. Make sure they are fully cooled before frosting them.

For the frosting, beat butter and cream cheese with electric mixer; add in the powdered sugar and booze and continue to mix until everything is well-incorporated. Continue to add more powdered sugar, as needed, until the frosting reaches the desired consistency that you prefer. Most times I have made this, I have definitely added closer to the full 3 cups of powdered sugar.

Frost each cupcake with the desired amount of frosting. If desired, you can also top each cupcake with some Oreo crumbs, as I did. I simply pulsed some chopped Oreos in a food processor to make the crumbs. Easy peasy! 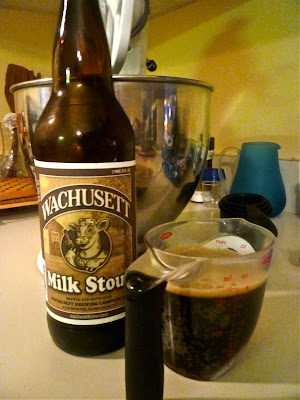 This time around I used Wachusett Milk Stout for the cupcakes. In the past, I've used Left Hand Milk Stout (one of my personal favorite stouts!). You could also use Guinness, as well as most other stouts that are out there. It's your call! The stout definitely enhances the chocolate flavor and moistness of these cupcakes.

Now, to frost these cupcakes, I used the large open star tip of my new set of Ateco frosting tips. I loved it! In the past, I've only had regular sized tips. This awesome tutorial from Our Best Bites on "how to frost cupcakes" encouraged me to buy myself a set of large tips. It was a great decision!! I will be using the large tips from now on for large cupcakes. I actual stuck with the regular sized open star tip though for the mini cupcakes of this batch. 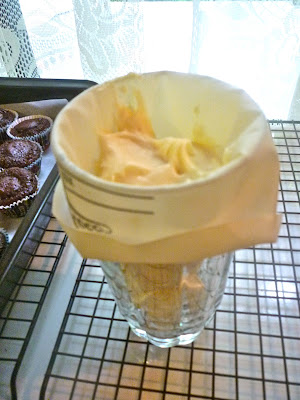 Another great tip? To help yourself with the sometimes challenging process of filling a piping bag with frosting, use a tall cup or glass to help you! It makes it so much easier to fill the bag. Just put the bag in the glass and then spoon your frosting into the bag. In the past I've always struggled with this, and it always seems like I get more frosting on myself or on the outside of the bag than actually in the bag! 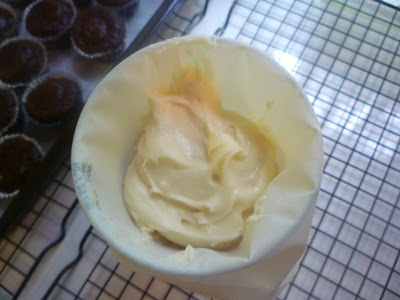 If you're at all intimidated by frosting cupcakes, I highly recommend that you check out Our Best Bites' tutorial. It's really helpful!! 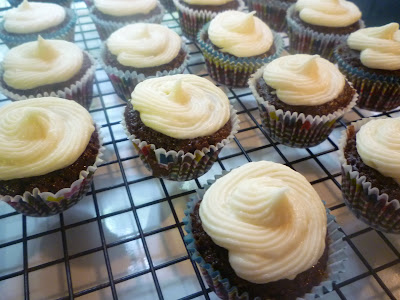 Minis! They're just so darn cute. 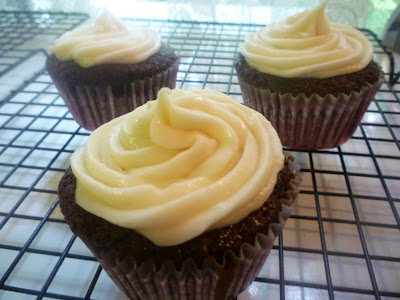 And the big guys. 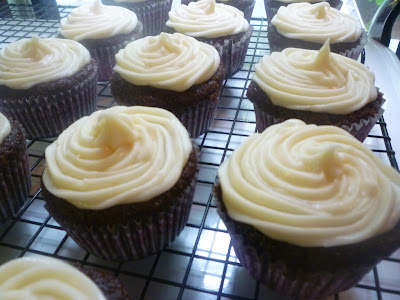 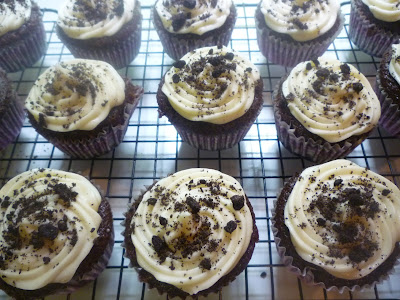 Oreo crumbs on top! I definitely think the cupcakes improved a ton by adding the crushed Oreo on top. ;) 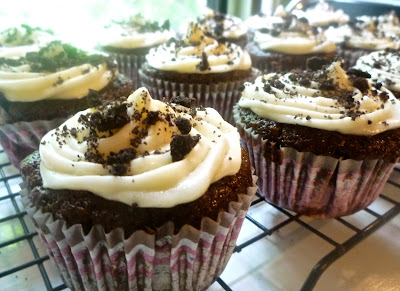 My cupcakes, all set for camp! I ended up making 15 large ones and about 36 mini ones from the one batch of cupcake batter. I did taste test one mini one though. Whoops! It was totally an accident, really. So, only 35 minis made their way to camp with me... 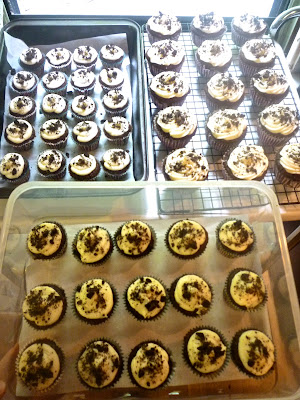 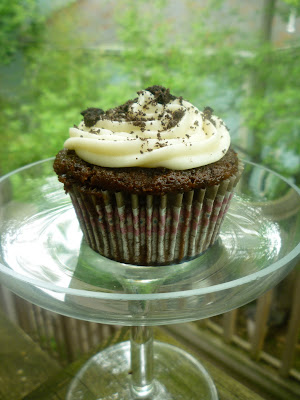 When I first arrived at Cupcake Camp (which, by the way, was held at this very cool building, the Armory, in Somerville), I was pretty early and not many bakers were there yet. I had been assigned a table on the upper level. 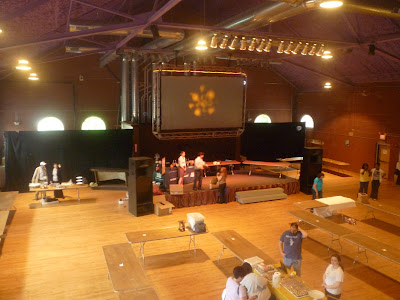 This was the upper level (picture below). 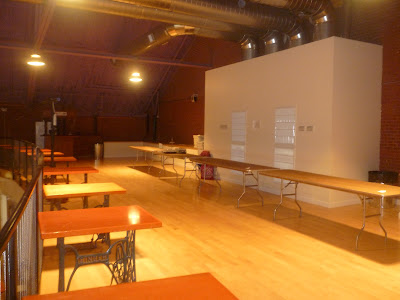 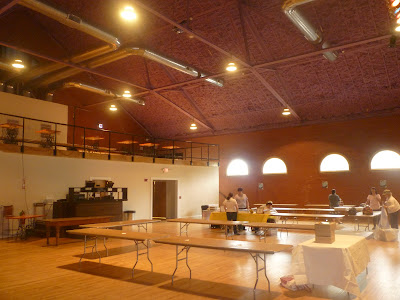 I didn't actually put my cupcakes out until about 10 minutes before the event was to start. I wanted them to stay fresh! 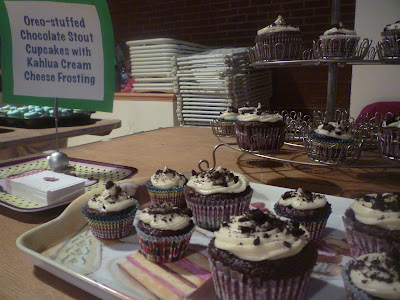 Once I got my display ready, I walked around to see a few other bakers' cupcakes. 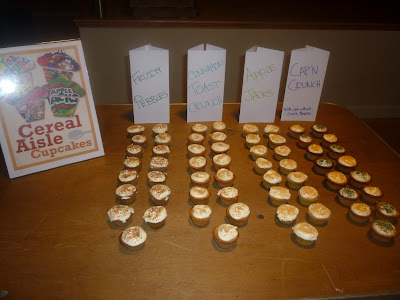 There were some very unique flavors! 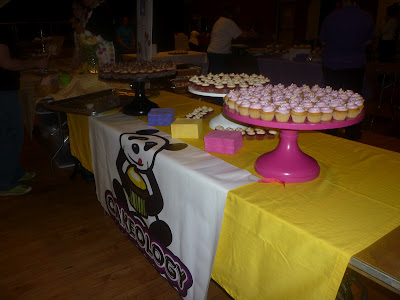 And many very pretty displays too. 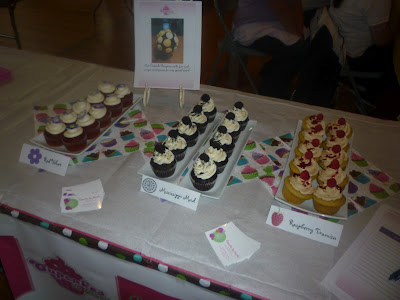 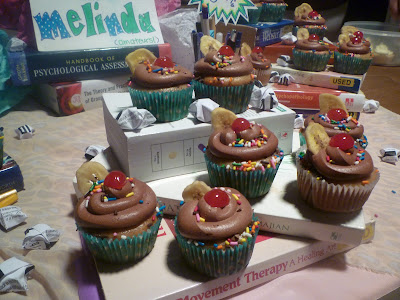 I cut one of my large cupcakes in half to have on display so that people could see there actually was an Oreo stuffed inside! 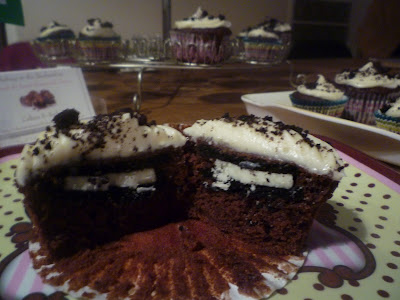 Throughout the night there was a steady stream of people stopping by my table, and it was fun to hear people's reactions to the Oreo-stuffed cupcakes. They were all positive! Well, all the ones I could hear anyway were positive. :)

I had brought a knife with me so that I could cut the larger cupcakes into smaller pieces for people to sample. The minis were a perfect size for this event; however, for this particular recipe, I was personally partial to the larger cupcakes, as I thought they better highlighted the Oreo being inside. With the minis, you could still tell there was an Oreo inside, but I think the Oreo to cupcake ratio was actually greater with the large cupcakes. 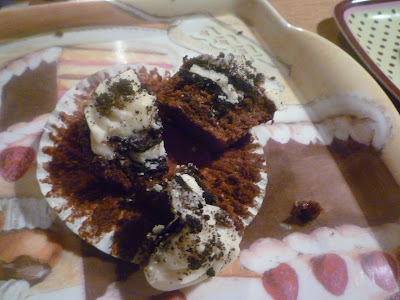 One thing that I think would be great for the event next year is a "map" of sorts to help attendees get a lay of the land. Ahead of the event, we bakers had to submit which types of cupcakes we would be bringing, and a few people commented to me that it would have made their time more efficient if they had known which flavors were at which tables/in which areas. I agree - great idea for next year! And the only other suggestion I heard for a change next year was to have more napkins around! I guess a lot of attendees were experiencing sticky hands and mouths due to all the cupcakes they were tasting and not having enough napkins around to clean up. :-P

As you can see from the pictures below, the event was very popular! It was steadily busy throughout the entire duration (6:00 - 9:00 pm). I ran out of cupcakes around 8:15, sadly. If I had had more time this year, I definitely would have made more. We were away at a wedding the weekend before the Monday night the event was held, so I just didn't have a lot of time to devote to baking. Next year hopefully I can make more cupcakes - and maybe even two different kinds! 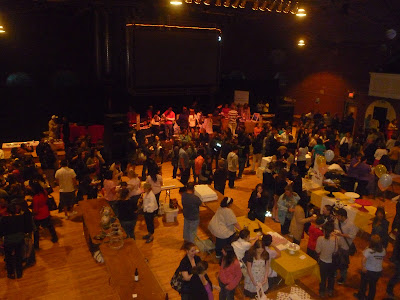 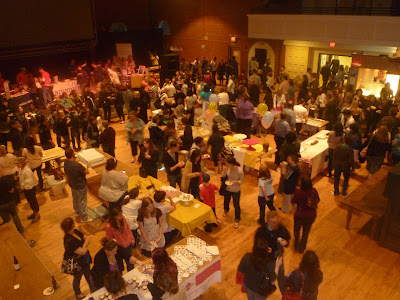 Cupcake Camp posted a great album of many more pictures of the evening on their facebook page. Definitely check it out! There are some really great shots of many of the delicious cupcakes made by the talented bakers who contributed to the event.

Several of my friends came to Cupcake Camp, and it was so nice to see many familiar faces at the event! You know who you are - thanks so much for coming. :) 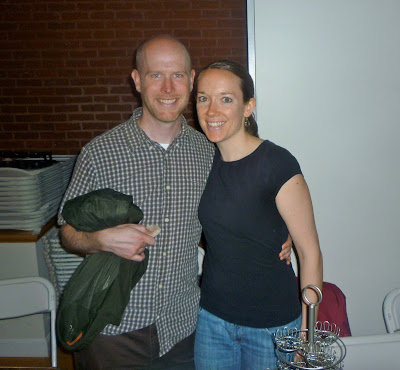 All the proceeds of Cupcake Camp go to a great organization, Lovin' Spoonfuls. It was so nice to be part of an event that contributes to an important cause! Thank you very much to the organizers and volunteers of Cupcake Camp for putting on a wonderful event! And kudos to all the professional and amateur bakers out there who baked up a storm for a great cause! :)