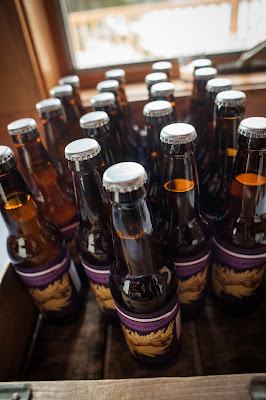 I thought I'd start a little series on the blog, "Wedding Wednesdays," where I could share with you some of the details of our wedding! If this isn't your thing, no worries; I'll still keep posting food-related posts too. :)

To start, I thought it might be fun to talk about one of our wedding favors...our homebrewed beer!! As you likely know if you've been reading my blog for a while, Mike and I homebrew beer (and in the past couple years, Mike has also started homebrewing wine!). We're the "beer and baking" duo to all of our friends. :) So when it came to deciding on wedding favors, making homebrew was somewhat of a no-brainer for us! It would be a great touch that would make our wedding day "feel like us."

It took us a while to narrow down which styles of beer to brew, but we decided to go with three kinds: an IPA, a stout, and a wheat. We brewed all the beers in the later summer/early fall, to give ourselves enough time to have them all done by early November. In case you're not familiar with homebrewing beer, the shortest time a batch can take is about a month, and this largely depends on the style of beer you're making.

Anyway, so once we had the styles we wanted to make, we came up with our recipes and we brewed the beers! We both really enjoy homebrewing and had a lot of fun with the process of making beers that we hoped our guests would love. Here are a couple pics we snapped when brewing the beers. 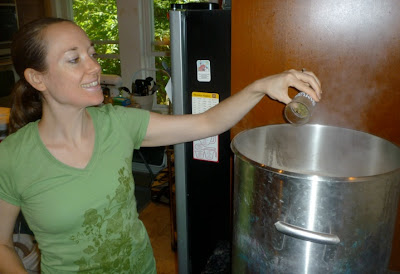 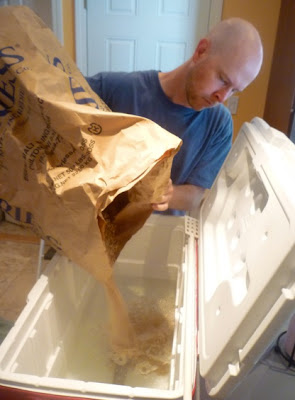 Mike is adding grains to the mash in this pic.

Next came the task of naming the beers! Here's a brief recap of how we came to name each beer (and pictures of each of the labels are below)...

We were trying to come up with a name for the IPA that was marriage/wedding related, and among the ideas we had was our final choice "I Do" IPA. We didn't end up liking any other ideas nearly as well as this one, so it was a pretty easy decision!

Our last name (my new last name!) is Hursh, so naming this beer Hurshy's Chocolate Stout was such a natural fit. It was perfect, really!

You may also know that Mike's adorable, lovable cat that he adopted a couple years ago (who is also now my cat!) is named Whiskey. At first we were playing around with a few wedding-themed names for this wheat beer (e.g., Wedded Bliss Wheat, Wedding Wheat, etc.), but then we thought of Whiskey's Wheat and knew that no other name would work!

Now, onto the labels! Good friends of ours were incredibly generous, and early on in our wedding planning when we had decided to make homebrew as a favor, they told us early that as our wedding gift, they wanted to take care of the labels for us. How awesome! So, they hired a very talented graphic designer in the Boston area to work with us, and she helped us create labels that were absolutely perfect to capture the meaning behind each of the beer names. We had so much fun working with her to design the labels!

I just love each of the designs! The "I Do" IPA has a guy proposing to a girl with a ring that's actually a hop. The Hurshy's Chocolate Stout looks like a Hershey's chocolate bar wrapper (obviously!), and the Whiskey's Wheat has a picture of our cat, with some stalks of wheat in the background. In the picture, Whiskey is in one of his favorite poses - on his back, belly up!

All three of the labels had this same general statement: "Colleen and Mike have enjoyed homebrewing together since they started dating. Each batch they create is fun, unique, and made with love." And following that, we had a couple lines that described the flavor characteristics of each particular beer. 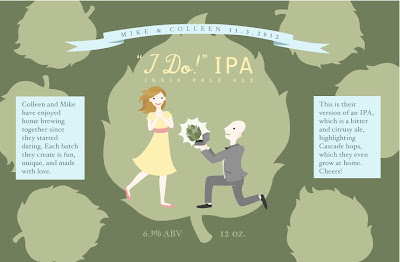 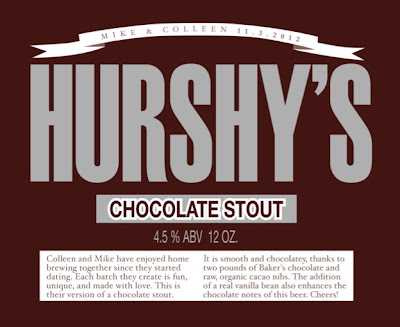 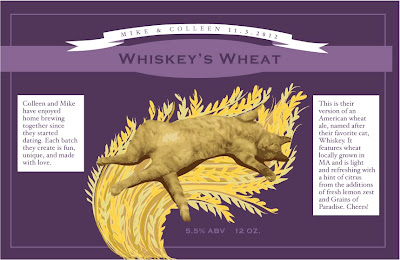 To display the beers, my parents let us borrow their awesome stand up "display canoe," which fit our Adirondacks-themed wedding venue perfectly! We made about 150 bottles of beer in total, and they didn't all fit in the canoe so we also used some wooden crates, which also worked really well. 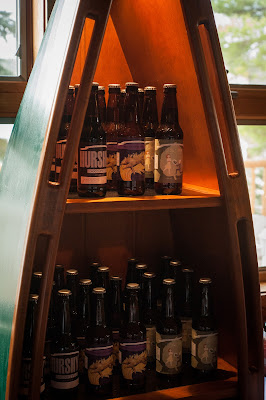 Here are a few of our guests, checking out the homebrew selection! We are so happy with how big of a hit the homebrew favors were. The awesome labels really brought the favors up a notch. 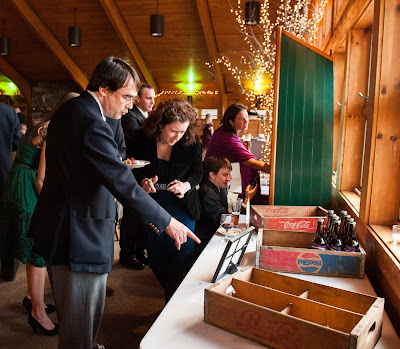 We put a sign next to the favors to share a little background about why we chose to give the homebrew to our guests, and we also described each of the beers so our guests could make an informed decision about which style they would choose! 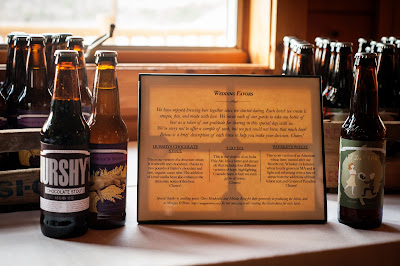 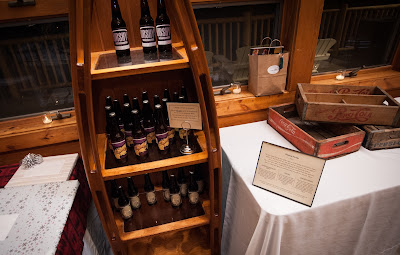 This photo below also shows our other favor (which also served as the escort cards for guests). I'll share with you next week what those are! :) 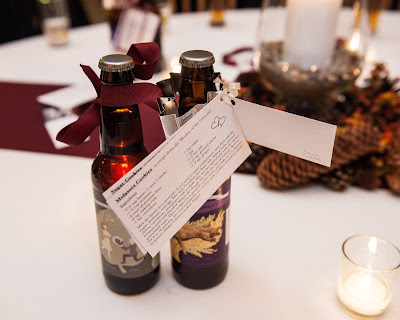 Thanks for reading my first edition of Wedding Wednesdays!!