'Tis the season for s'mores. Summertime. Campfires. Late evenings spent outside. I am the first to admit that I love the traditional "s'mores," but I'm also one to try a new twist on an old favorite. So when I saw this idea for grilled banana s'mores on Pinterest, I figured it was definitely worth a shot! 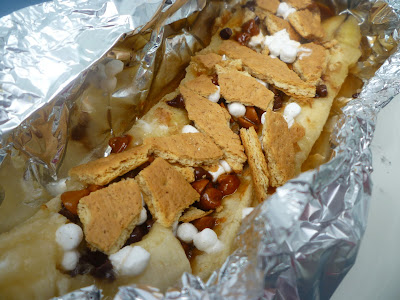 The original "recipe" I followed can be found here, at a great cooking site called Quick Dish. The recipe calls for crushed Cinnamon Toast Crunch cereal (which would be awesome), but since I didn't have any on hand I just used some crushed graham crackers. So, the "recipe" I followed is this one below.

Now keep in mind that this is designed to be done on a gas or charcoal grill outside. However, if you don't have a grill, you could easily make it in the oven, or better yet, by the campfire! I made these grilled banana s'mores for a Fourth of July bbq we attended, so I used a grill. If you'd like to try the oven or campfire method, be sure to read the original recipe for those instructions.

Preheat grill to medium high heat. Place peeled banana on large piece of foil (I'd say about 1 square foot or so). Slice banana lengthwise so that it's slightly open. Sprinkle desired amount of marshmallows and chocolate chips on top. Loosely wrap the banana in the foil, and grill for 5 to 6 minutes. Unwrap the banana and top with desired amount of crushed graham crackers.

Serve in a bowl with a spoon for the smallest mess. ;) Or, enjoy however else you please! Just be careful; these banana s'mores are hot right off the grill! 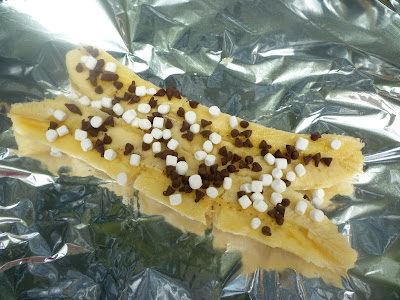 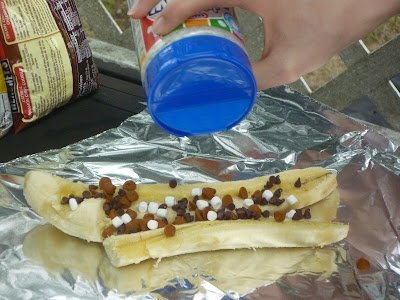 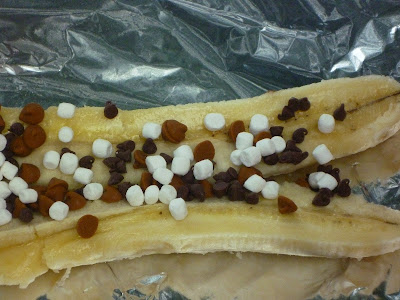 Mike took most of these pictures for me while I was acting as "chef." It was a super hot day, so I was a tad warm by the grill! But these fun treats were worth it. And I really can't complain. I wasn't by the grill nearly as long as our friend Jake who did all the cooking of the burgers and dogs! 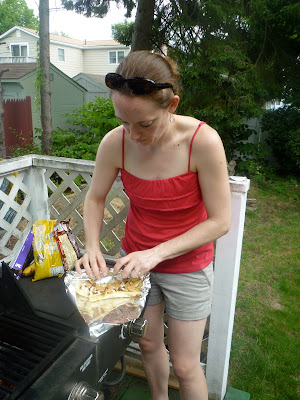 I actually didn't use the traditional mini marshmallows. Instead, I used these "jet puffed mallow bits" I had found. They worked great! It was easy to just sprinkle them on. 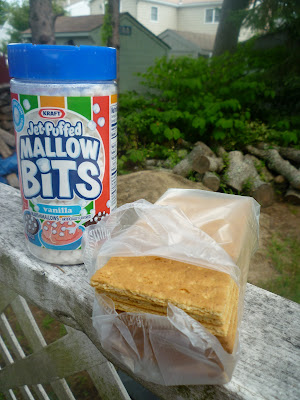 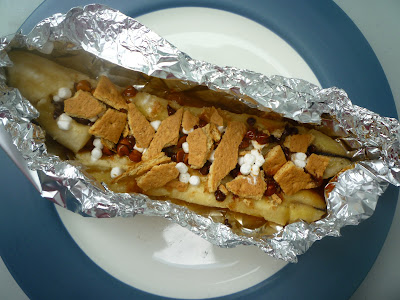 I actually accidentally put the graham crackers on before the whole thing went on the grill. They remained fairly crunchy though! 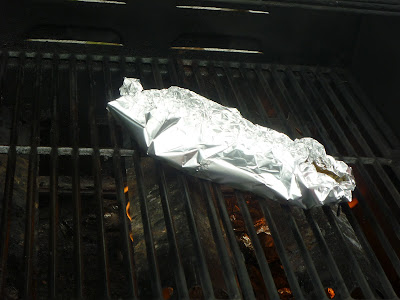 I think I probably should have crushed up the graham crackers a bit more finely. Oops.
Next time! They did add a nice crunch though to contrast the ooey, gooey melty-ness of the rest of the dessert. 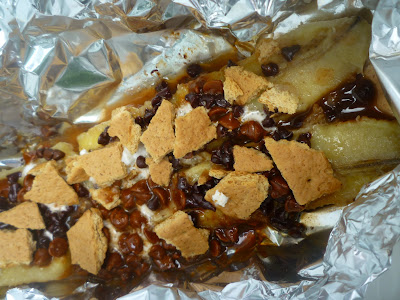 This is how I enjoyed my portion - all mixed up in a bowl with a spoon! It was quite easy to eat that way. I loved the added flavor with the cinnamon chips!

I think these banana s'mores would be great with other flavored chips too. I'm especially thinking butterscotch... 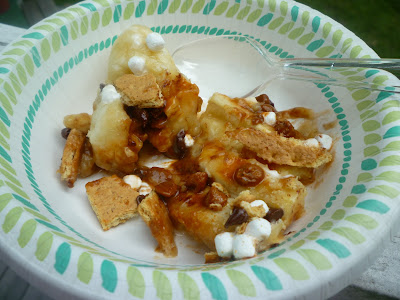 These are such a fun summertime treat! You should give 'em a try the next time you're out by the grill or the campfire. :)