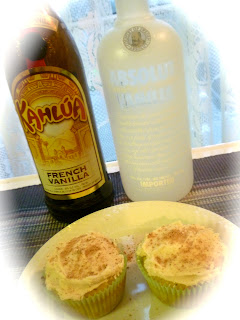 White Russian cupcakes? Yes, I went there. I've made treats with booze in them in the past (cupcakes with kahlua cream cheese frosting, creme de menthe bars, beer bread, etc.). But these White Russian cupcakes really stepped it up to a whole new level. This recipe called for not one liquor - but two! Kahlua AND Vodka. The coworker for whom I made these cupcakes requested a dessert with alcohol in it. Simple request. Done and done.
The recipe is adapted from Baked Perfection. I doubled the recipe (with a couple minor changes) and made about 18 large cupcakes and 8 mini ones.
Ingredients:
For the cupcakes:
-2 and 1/2 cups all-purpose flour
-2 and 1/2 tsp. baking powder
-1/2 tsp. salt
-1 and 1/2 cups sugar
-12 Tbsp. butter, softened
-2 large eggs and 2 large egg whites
-2 tsp. vanilla extract
-1 cup milk
-1/4 cup vodka (I used vanilla flavored)
-1/4 cup kahlua (this was also vanilla flavored for me)
For the kahlua buttercream frosting:
-1 stick butter, softened
-3 cups powdered sugar
-pinch of salt
-3 to 4 Tbsp. kahlua
Instructions:
Preheat oven to 350 degrees and line muffin pan with cupcake liners. In a large bowl, mix together the flour, baking powder, and salt; set aside. In a separate bowl or stand mixer, beat the sugar and butter until well combined. Add the eggs and egg whites, one at a time, beating after each addition. Add the vanilla, vodka, and kahlua. Gradually add the flour mixture, in three additions, each time alternating with the milk and ending with the flour mixture.
Bake for 15 to 18 minutes or until a toothpick inserted in the middle of the cupcakes comes out clean. Remove from pan and cool completely on cooling rack.
For the frosting, beat butter until creamy, then add the salt. Add the powdered sugar 1 cup at a time, and beat well. Add kahlua one tablespoon at a time until desired consistency of frosting is reached. If you'd like, sprinkle cocoa powder or chocolate shavings on top of the frosting (I added chocolate shavings). 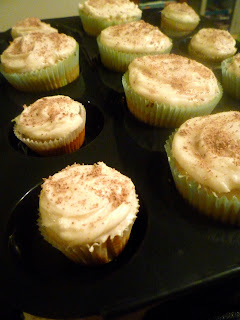 You'll have to forgive my poorer than usual quality of the photos. I finished frosting these in the evening and was kind of running around/doing a million things at once, in general, so I didn't take a ton of time with my pictures. And as you know, I don't have a fancy camera or a nice lamp to improve my food photos... 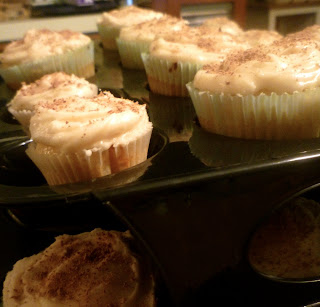 The cupcakes were a total success at work! The flavor of the alcohol was definitely there but it wasn't overpowering in any way. It really just enhanced the overall flavor of these cupcakes, I think. I'm thinking I should bake cupcakes with liquor more often! Ha. 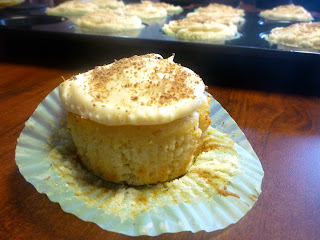 And the kahlua frosting? Awesome. Definitely a keeper of a recipe. As you know, I also used some leftover frosting to make a few to-die-for chocolate chip sandwich cookies... 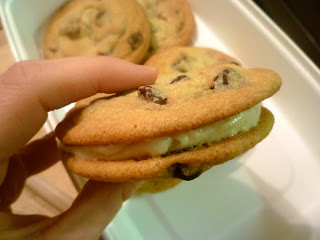 Again, I apologize for the poor photo quality. But I hope you get the gist that these cupcakes were awesome. They come highly recommended by my coworkers and me!! 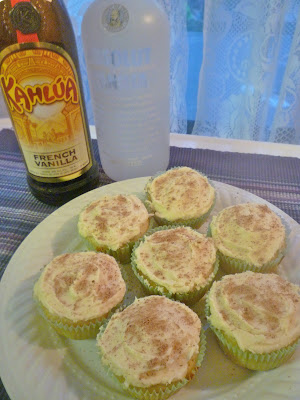 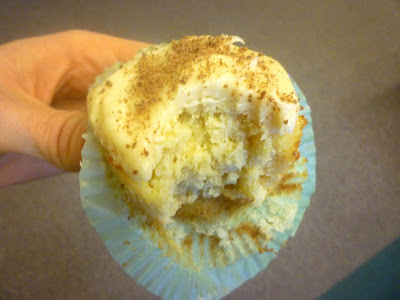 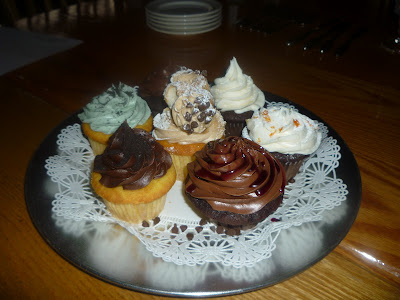 Ooooh, and what are these cupcakes, might you ask??! Well, these are the seven (yes, seven!) cupcakes that Mike and I tasted a couple weeks ago when we had the tasting for our wedding food. Oh my goodness. They were all soooo good! Our reception venue has the same idea I did with these White Russian cupcakes, as several of the cupcakes they made for us involved alcohol! No kidding. The cupcakes involving liquor included a cabernet chocolate frosting, a Creme de Menthe frosting (with crushed Oreos on top!), a Bailey's chocolate frosting, and a Grand Marnier frosting.
Heavenly.
I won't reveal which ones we chose for the wedding though. Sorry. ;)
Posted by Colleen at Wednesday, March 07, 2012