I love snacking. I typically eat a little bit every 2 to 3 hours during the day, so many of the times I'm eating I would consider what I'm eating to be a "snack" rather than a meal. My lunches are more meal-like, but they tend to be small, and during the week at work you can often find me having a snack about two hours after I've eaten lunch.... And then I also often have a snack when I get home from work...and in the mid-morning I have a snack. So, you see, I snack a lot. ;)
For fun, I thought I'd share with you a couple of my current, favorite snacks. I sometimes go in cycles; I have a particular snack that's my favorite for a few months, and then eventually I change it up and have another favorite go-to snack for a while. Well, currently my two favorites are apple slices with honey and cinnamon and a warmed, mashed banana mixed with peanut butter. Let me explain!
Perhaps some of you enjoy apples like this too. For my sliced apple snack, I simply cut up an apple, drizzle it with a bit of honey and then sprinkle a little cinnamon on top. Delish!! I also love apples plain, but every now and then I'm in a mood to eat them differently, so that's when this apple, honey, and cinnamon snack comes into play. Such a great combo. 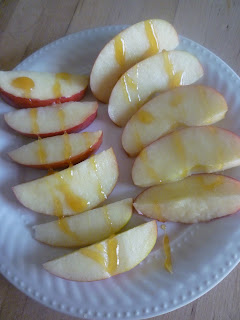 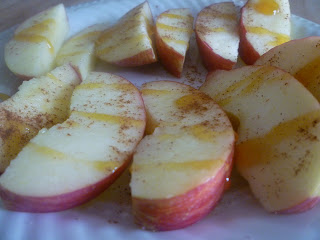 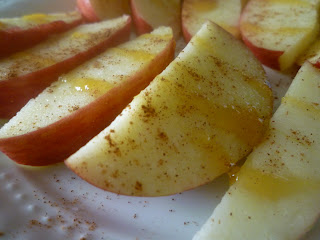 And for the past few weeks, at least two or three times a week, I've been having an ooey gooey banana and peanut butter snack. If you love the flavor combo of banana and peanut butter (and let's be serious - who doesn't?!), you'll love this. Generally, I cut up either half a banana or a whole one, depending on how hungry I am, and I put the banana slices in a mug. You could also do this in a bowl but it's more fun in a mug for some reason. Then I add about two teaspoons or so of peanut butter to the mug and pop it in the microwave. The first amount of time I "nuke" it for is usually 30 seconds and depending on the ripeness of the banana, sometimes it needs another nuking of about 15 more seconds or so. Usually after a total of 45 seconds, the banana and peanut butter are plenty warm, and the banana has become mushy and soft. I stir everything together and eat it by the spoonful! Soooo good. I personally think this snack is better with bananas that are on the riper side (i.e., have some brown spots on them). One time last week when I needed a more substantial snack to last me a few hours until I would be eating dinner, I enjoyed the warmed, mashed peanut butter and banana on a toasted 100-calorie whole wheat sandwich thin. Also delicious!! This weekend I had a whole banana with some peanut butter (warmed up and mashed together, of course!) before I went to the gym to take a Turbo Kick class. It was the perfect fuel to get me through a tough workout! 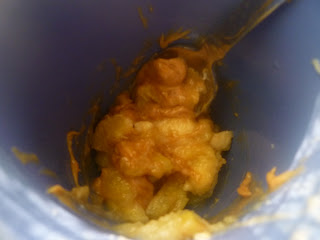 It doesn't look all that appetizing, but trust me, it's delicious. And it's so fun to eat out of a mug! 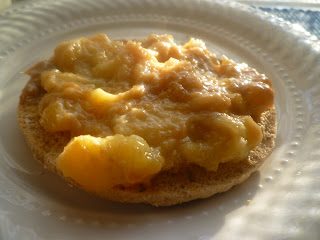 This was when I spread the deliciousness on a toasted whole wheat sandwich thin. 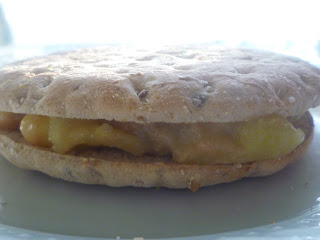 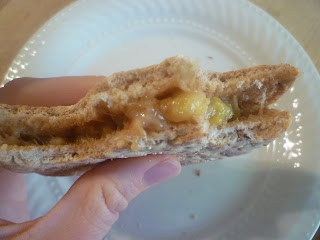 What are some of your favorite snacks that are on the healthy side and don't take much time to prepare? I'd love to hear them. Perhaps you have an idea that will become my next go-to snack once these two are out of the rotation! :)
Posted by Colleen at Sunday, February 19, 2012