Helloooo! I've been meaning to write this post since Tuesday, but alas, time has slipped away from me. What a busy week! 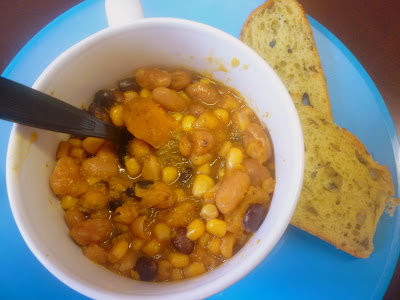 Speaking of busy weeks, this recipe for bean and butternut squash chili is perfect for a busy week. There's nothing quite like coming home from work, walking in the door, and smelling the delicious aromas of dinner that's been cooking slowly in the crock pot all day long. Mmmmm. It's one of my favorite food "experiences"! Sadly though, I don't cook enough with my crock pot. I really need to make more tasty meals with it!
I was a big fan of this chili when I made it last week. But you know what? I became even more of a big fan of it when I ate it as leftovers. This was one of those dishes (in my opinion) that's better the day after! I made this last Thursday, I believe, and I just finished up the leftovers this week. Soooo good! This hearty, flavorful chili, paired with a delicious slice of When Pigs Fly bread (their best-selling baby spinach, onion, and garlic ciabatta), was my lunch on Monday, Tuesday, and Wednesday this week. And nope, I didn't get sick of it. That's the sign of a good recipe. :)
The original recipe was posted on the blog Perry's Plate, and the recipe was actually a guest post by another great blog, Budget Gourmet Mom. The ingredients posted below are what I used (slightly different than the original). I ended up adding some chopped green pepper that wasn't in the original recipe. Otherwise, I followed it almost exactly with just a couple other slight changes!
Ingredients:
-1 20-oz. package butternut squash
-1 medium onion, diced
-1 medium green pepper, diced
-2 jalapeno peppers, finely chopped
-olive oil
-1 15-oz. can black beans, rinsed and drained
-1 15-oz. can white beans, rinsed and drained
-1 14.5-oz. vegetable or chicken broth (low sodium, if desired)
-1 16-oz. bag frozen corn
-2 Tbsp. chili powder
-salt and pepper 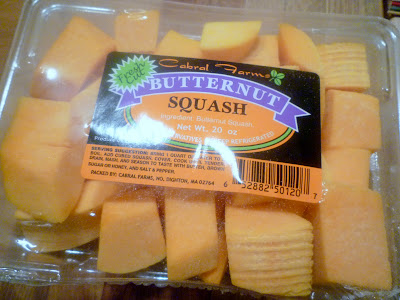 Instructions:
Heat olive oil in a large skillet over medium heat. Saute the onion, pepper, and jalapeno pepper for a few minutes. Add the butternut squash and saute until slightly tender.
Pour the sauteed vegetables into your crock pot. Add the rest of the ingredients and stir until well-mixed. Season with salt and pepper. Cook on low for 6 to 8 hours. Serves 6 to 8. 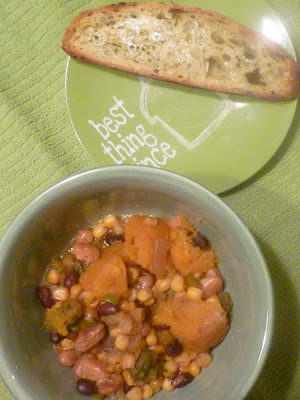 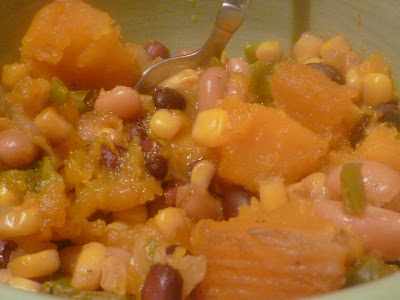 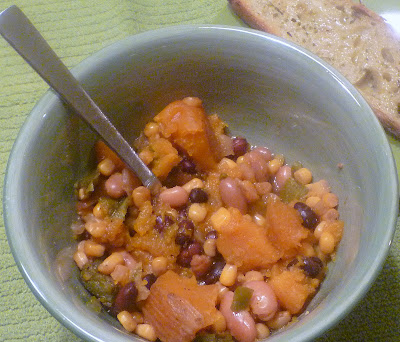 I cooked mine on low for closer to 9 to 10 hours, and it turned out just fine. I also sauteed the veggies the night before, let them cool, and kept them in the fridge overnight before putting them in the crock pot early the next morning. As I mentioned, the addition of the green pepper was not in the original recipe, and I also added two jalapeno peppers instead of one. Also of note, in my opinion, this chili was a little heavy on the corn. When I make it again, I think I might only add 8 or 10 ounces of a bag of frozen corn instead of the entire 16 ounces. I also think you could easily add other veggies too like other types of squash or peppers.
As I mentioned above, for some reason, this chili tasted better to me the next day (and on subsequent days when I continued to enjoy the leftovers). I'm not really sure why! Sometimes I guess it just seems that a recipe benefits from "sitting" longer and letting the flavors meld together better.
As you can see, there are two "sets" of pictures of this chili. The ones of the chili in the green bowl I took the night I made this chili. And the other ones in the white mug are of when I ate the chili at work for lunch. I'm obviously not an experienced photographer, nor do I have great camera equipment or any special lighting, so I do apologize for the less-than-perfect pictures! But trust me, despite how this chili looks in the photos, it's quite a tasty recipe! 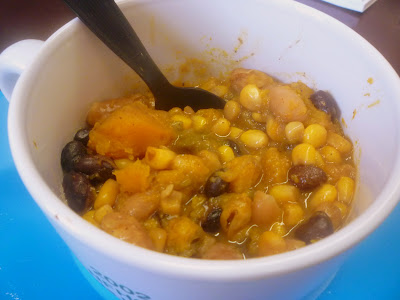 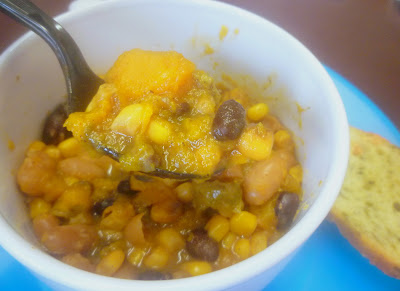 Hope you all have a wonderful weekend and enjoy the Super Bowl! Did you know that the average American consumes four chicken wings on Super Bowl Sunday? I did not until I heard that on the radio today (if it is, in fact, true). Mike and some friends and I plan to munch on various goodies during the game, including homemade pizza. I am thinking that one of the pizzas we make has to be shaped like this one. How fun is that?? And if you're not a pepperoni person, you could easily do sliced tomatoes or something in place of the pepperoni. I found some great Super Bowl appetizer ideas on Pinterest this week! 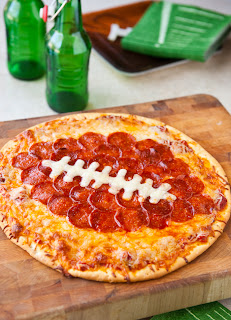 (photo source)
Gooo Giants! And yes, I live in Boston now, but the first 22 years of my life were spent in New York State so I'm rooting for the Giants. :)
Enjoy your celebrations, friends!
Posted by Colleen at Thursday, February 02, 2012