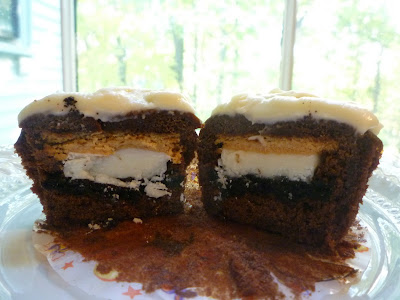 Yes, you heard me right. Or, rather, you read my words correctly. ;-) These are OREO STUFFED chocolate cupcakes. I was inspired to try this by recently reading some recipes about making oreo stuffed chocolate chip cookies. I actually bought oreos several weeks ago with the intent to make those cookies. But then came the occasion of a coworker's birthday (which also happened to fall on Halloween!), and I thought to myself, you should really use those oreos you bought a while ago. I wanted to make cupcakes for the birthday occasion though since they're much more birthday-like than cookies. And then there it was - the idea for oreo stuffed cupcakes! As soon as I had the idea, I knew it would be a winner. 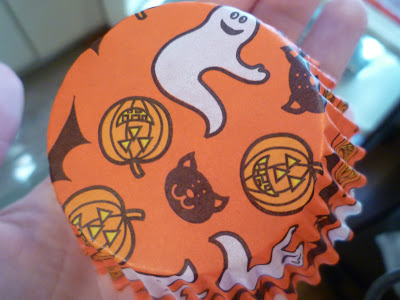 When making cupcakes on Halloween, one must use Halloween-themed liners! 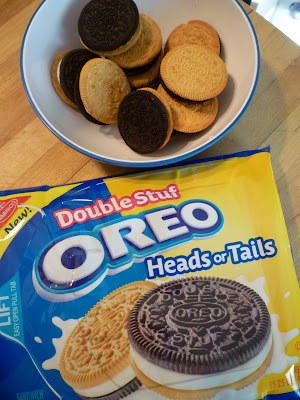 The oreos I used weren't classic oreos; rather, they were these newfangled "heads or tails" oreos that have one chocolate wafer and one vanilla one. Even better - the best of both worlds!
I'll share the actual cupcake ingredients later on in the post, but first, the method of stuffing the cupcakes... It's quite simple really. 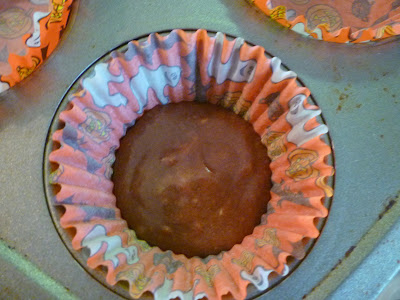 Put a spoonful of cupcake batter in the bottom of the liner. And by spoonful, I mean about a tablespoon or so? 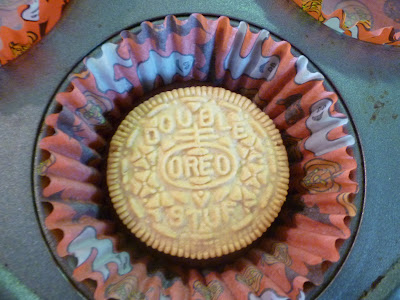 Next, the oreo goes in! 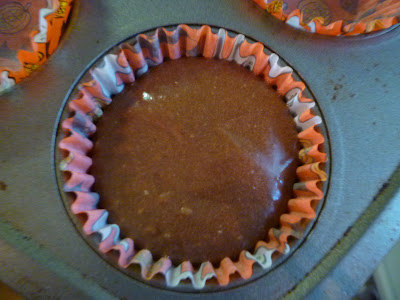 Finally, place more cupcake batter on top of the oreo and fill until the cup is about 2/3 to 3/4 of the way filled. That's it folks! 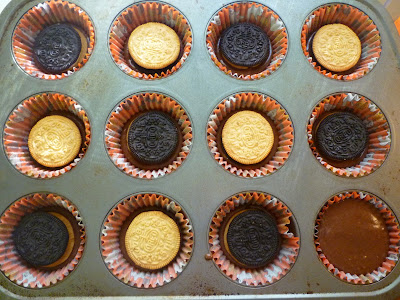 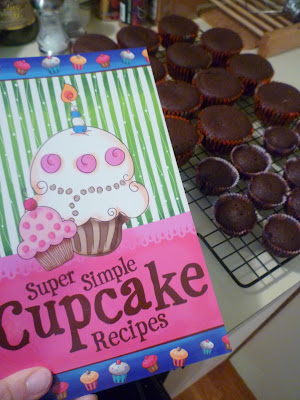 I used a new recipe from this fun book. The original recipe was just for the chocolate cupcakes. The addition of the oreos was a Barbershop twist on the original. Oh, and actually, I added the salt and vanilla to the ingredients list myself too. They weren't in the original recipe.
Ingredients:
-1/2 cup unsweetened cocoa
-1 cup hot water
-1 and 2/3 cups flour
-1 and 1/2 cups sugar
-1/2 tsp. baking soda
-1/2 tsp. salt
-1/2 cup butter, softened
-2 eggs
-1 tsp. vanilla
-20 to 24 oreos (any kind will do!)
Instructions:
Preheat oven to 350 degrees. Place paper cupcake liners in muffin pan. Mix the cocoa with the hot water in a bowl until the mixture is smooth. Set aside and let the mixture cool for about 10 minutes. When it's cool, place it in a mixing bowl and add the flour, sugar, baking soda, salt, butter, eggs, and vanilla. Beat on low speed for two minutes. Increase speed and beat for two additional minutes. Using the method I described above, make your oreo stuffed cupcakes and fill the cups about 2/3 to 3/4 of the way full.
Bake for 15 to 20 minutes, or until a toothpick inserted into the center comes out clean. Remove from pan and let cool completely on wire rack before frosting.

I was pretty pleased with the flavor of these cupcakes. And they were very moist! That's key for me when it comes to cupcakes.
For the frosting on these little gems, I used a recipe I previously posted about and looooved. It's this kahlua cream cheese frosting. Use any frosting you'd like though! Classic vanilla or chocolate frosting would be great with these cupcakes.
Now, because I was making these cupcakes for a Halloween birthday, I decided to decorate them in a way that fit Halloween. I made them into mummies!  The method to make mummies is very simple. And you don't have to be very precise either which is always nice. :) I used my Wilton cake decorating tip #47. Basically, to create the mummy look, just pipe lines with your pastry bag any which way you want on top of the cupcake and you've got yourself a mummy! Then place a couple candies of your choice on top for the eyes. Anyone can do it! No need for them to look perfect. 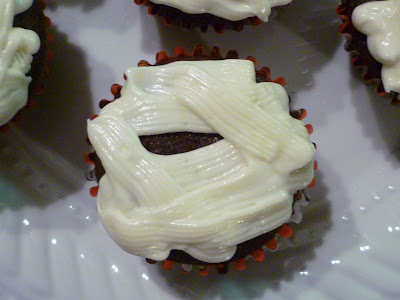 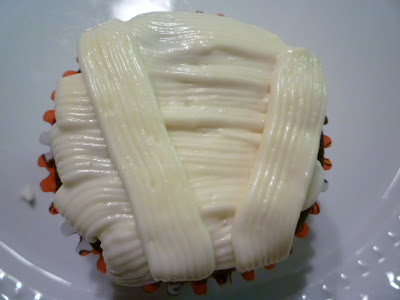 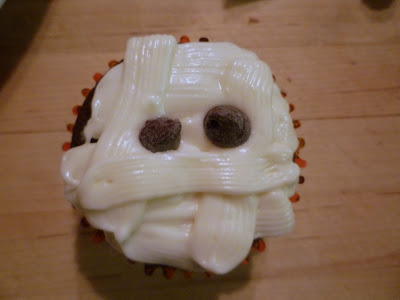 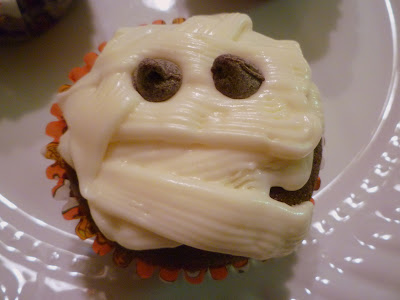 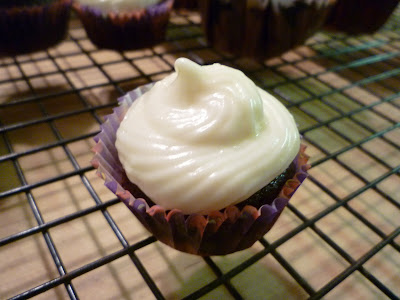 I made about a dozen mini cupcakes too! These did not have oreos in them though. :( 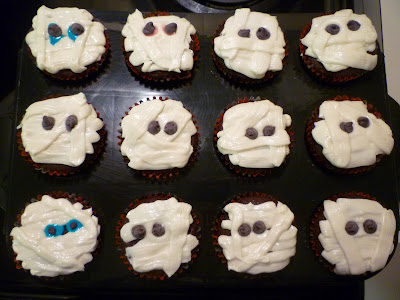 Here's my family of mummies, just chillin'. Little did they know the fate that was around the corner for them... Poor mummies didn't know they'd be completely devoured the next day. 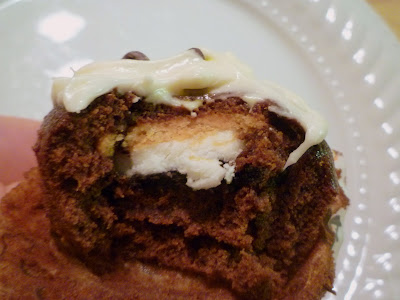 The first night I made these, I taste tested one just to be sure they were worthy of being fed to my coworkers and the birthday guest of honor the next day at work. Rest assured; they were.
Below are a few more looks at the deliciousness that is the newly discovered favorite type of cupcake among my coworkers... 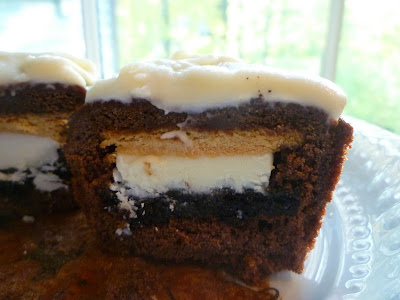 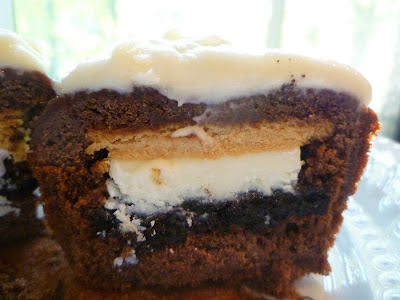 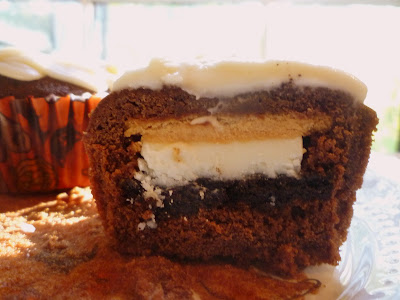 Cupcakes will never be the same!!
Posted by Colleen at Tuesday, November 01, 2011