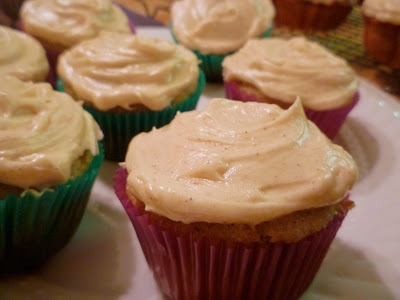 Hi there! I made these cupcakes last week for a get-together with my fiancé's coworkers (I'm still getting used to saying fiancé!). The recipe is from my new Martha Stewart cupcake book, so I was quite excited to try it! Ya gotta love when a new recipe is a success. Read on to the end to see my full impressions! :)
Ingredients:
Cupcakes:
-3 ripe bananas (roughly 1.5 cups of mashed banana)
-2 cups cake flour*
-1/2 tsp. baking soda
-1/2 tsp. baking powder
-3/4 tsp. salt
-3/4 tsp. cinnamon (I added this; it wasn't in the original recipe)
-1/2 cup (1 stick) unsalted butter, at room temperature
-3/4 cup sugar
-3 large eggs, separated
-1/2 cup sour cream (I used banana flavored yogurt instead)
-1 tsp. vanilla extract
*If you do not have cake flour, I recently discovered an awesome substitute for it! You just need all-purpose flour and cornstarch. Check it out here. ;-)
Frosting:
-2 and 1/2 cups confectioners' sugar, sifted
-1 cup (2 sticks) unsalted butter, at room temperature
-2 Tbsp. honey
-1/4 tsp. ground cinnamon (I probably added closer to 1/2 tsp.)
Instructions:
Preheat oven to 350. Line standard muffin tins with paper liners. Sift together cake flour, baking soda, baking powder, and salt. With an electric mixer on medium-high speed, cream butter and sugar until pale and fluffy. Add egg yolks, one at a time, beating until each is incorporated, scraping down sides of bowl as needed. Add the bananas, and beat to combine. Add flour mixture in three batches, alternating with two additions of the sour cream (or yogurt), and beating until just combined after each. Beat in vanilla.
In another mixing bowl, with an electric mixer on medium speed, whisk egg whites to soft peaks; fold one-third of the whites into batter to lighten. Gently fold in remaining whites in two batches. 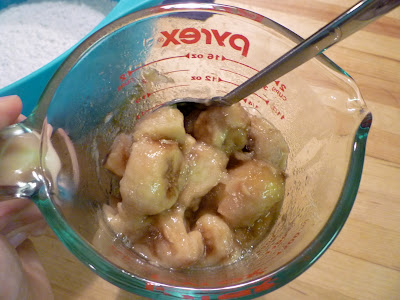 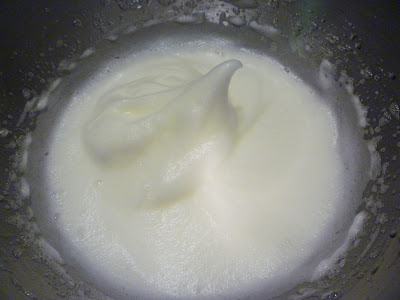 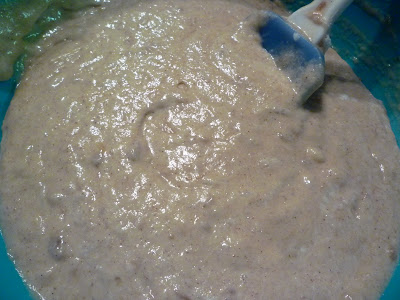 Divide batter evenly among lined cups, filling each 3/4 full. Bake until a cake tester inserted comes out clean, about 15 - 20 minutes. Transfer to cooling rack to cool completely. Cupcakes can be stored up to 3 days at room temperature, or frozen up to 2 months, in airtight containers. 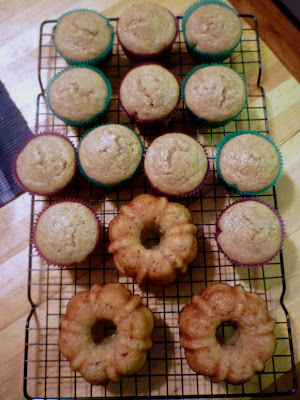 This recipe made 12 cupcakes and 3 mini bundt cakes for me. 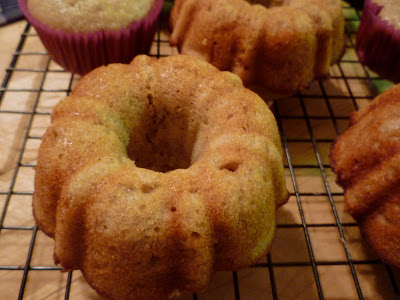 For the frosting, with an electric mixer on medium speed, beat all ingredients until smooth. Use immediately, or refrigerate up to 5 days in an airtight container. Before using, bring to room temperature and beat until smooth. 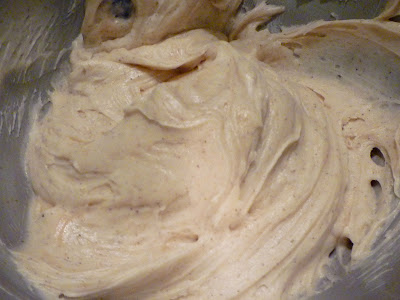 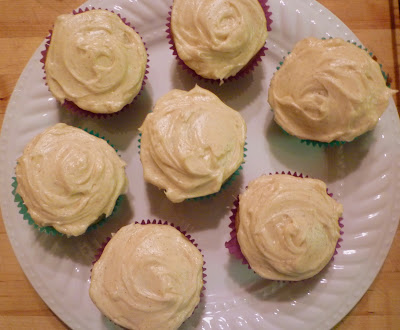 So as I said, this recipe was definitely a success. I would make it again! However, I have a couple points to share... 1) The cupcake itself was very yummy but it was rather muffin-like at the same time. The frosting is really what made these cupcakes, if you ask me. ;-) 2) I did not follow the cupcake recipe exactly... As you may have read earlier, I added cinnamon (which was a great choice, I think!) and I used banana yogurt instead of sour cream (also a good choice!).
What I did not do, though, was roast the bananas. You see, this recipe is actually for roasted banana cupcakes. Yep! I think that probably would have enhanced the banana flavor of these even more, which would be great. I did not have enough ripe bananas on hand to roast, however. What I always have on hand though is frozen ripe bananas, and that's what I used in this recipe. Whenever my bananas go ripe and I don't have enough free time to bake with them, I cut them up and freeze them to use later (just let them thaw before using them). So, sadly, I didn't get the full experience of making these cupcakes with roasted bananas. Guess I'll just have to make them again! Or, perhaps you can try making these with roasted bananas and let me know what you think. To roast the bananas, heat the oven to 400 degrees, and roast 3 whole (unpeeled!) bananas on a baking sheet for about 15 minutes. Let them cool before peeling.
Oh, and this honey cinnamon frosting? Amazing. Loved it. It's definitely what makes these cupcakes, in my opinion. The frosting recipe is certainly a keeper to use with other cake flavors! Perhaps with carrot cake instead of a traditional cream cheese frosting? YUM! I can taste it now.
K, friends, that's it! Hope everyone's week is off to a good start so far!
Posted by Colleen at Monday, September 26, 2011