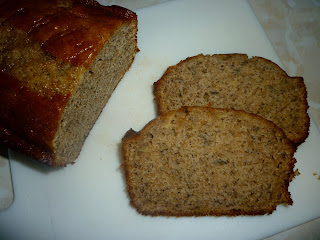 WOW. Has it really been about three weeks since my last post? I think it has! I am really bummed about not having had much time to blog lately. I miss it! Hopefully I can write more in the near future. Maybe you've been missing me as I've been missing blogging for you? It'd be nice if that was the case. ;-)
Anyway, I'm coming back to you today with a delicious recipe for a classic banana bread. Everyone needs a great banana bread recipe, right? I'd say so! You may remember my previous post for marbled chocolate banana bread. That's one of my all-time favorite quick breads. When I had some very ripe bananas last week, I considered making the marbled chocolate version, but then I thought that I should find a new, traditional banana bread recipe that I really like. And bingo, I found it! It's a Cooking Light recipe that can be found here. After trying this bread, I decided that I loved this new recipe. I did make a couple changes though, as I usually do! I used half whole wheat flour and half all-purpose (as shown in the first picture below). I also just so happened to use peach flavored yogurt, inadvertently, even though the recipe calls for just regular yogurt. Peach was all I had! It worked though, and you couldn't detect that peach yogurt was used, don't worry! But maybe that was the secret ingredient though that made the bread yummy?  Hmmmm...
Here are a few pictures for you. 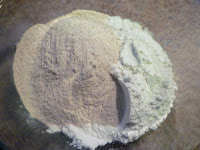 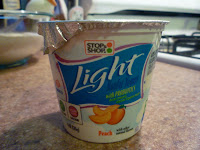 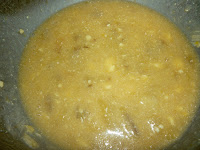 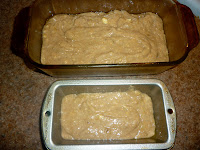 The batter, all ready to go into the oven. As you can see, it made one regular sized loaf and one small one. 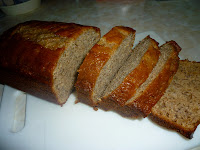 Final product, being sliced for consumption!
I brought this bread home to share with my parents last weekend, and they really liked it too. I love that it's very tasty, moist, AND a cooking light recipe! You know what I just realized I meant to do with a slice of this bread but just never did? I thought it'd be yummy to toast a slice of banana bread and top it with some peanut butter... Doesn't that sound deeelicious? Maybe I'll do that next time. You can be sure that I'll report back to you when I do!
Hope to see you again much sooner than three weeks from now!
Posted by Colleen at Tuesday, August 10, 2010