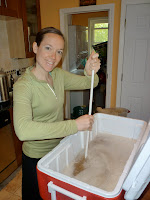 Spent grain bread? You may be wondering what that is... Well, let me explain! As many of you know, my boyfriend Mike homebrews beer, and I have joined him several times in the beer brewing process during the past couple years. Last year we found a recipe for spent grain bread, which uses the leftover grains used to make beer. And it's sooo good! Whenever possible now, after brewing, we try to make a couple loaves of this bread so that we don't waste the grains...as the title of this post says, waste not, want not! The only problem though is that typically you might use upwards of 12 or 13 POUNDS of grains in a batch of beer, and the recipe for this bread only used 1.5 to 2 cups of grains to make two loaves. That's a lot of leftover grains still! At least we use some of them I guess? Another typical thing that brewers do with spent grain is give them to farmers to use as feed for their animals. There aren't too many farms in Boston, but maybe one of these days we'll venture out and find a farmer that could benefit from our leftover grains. :)
Now I realize that many of you might not have access to spent grain, but you are welcome to ask me for some anytime! Or, you can just read this recipe and hope that I'll make some to give to you one of these days. ;-)
Want to see a couple pictures of us brewing our delicious beer? I thought you did! Here I am, pouring out all 13 pounds of grains!!! 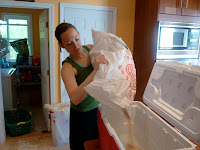 And here's Mike, later on in the brewing process (during the boil), checking in to make sure everything's doing what it should be! And he's making a silly face, as he often does. :-P 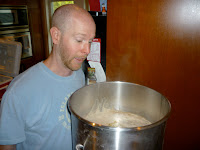 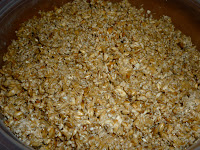 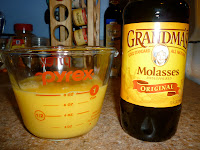 Put warm water in bowl, sprinkle with yeast and let dissolve. In saucepan, melt butter with milk. After the butter is melted in milk, remove from stove and add apple juice, molasses, sugar and salt. By now the yeast should be working (foaming), add in the butter/milk mixture, and then add the spent grain and whole wheat flour. 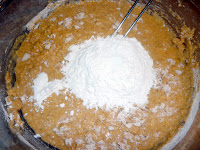 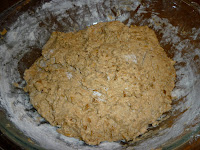 Here is the dough before I let it rise....
And woah! Like magic, it is now ginormous! (I also made this picture be larger than others to exaggerate how much it grew... ;-)) 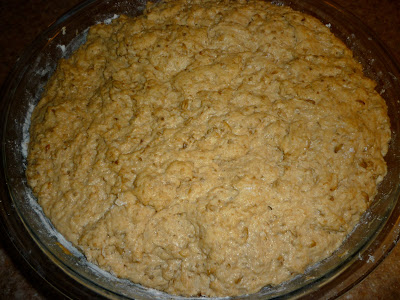 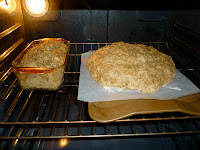 Here is the round loaf, fresh out of the oven! Mmmmm, I just love bread. It's such a comforting food, especially when you make it yourself! 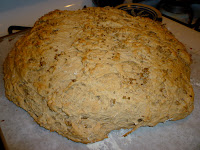 I brought some of the finished product up to my sister's when I visited her for her recent 30th birthday...  We went on a hike together, and we ate some bread as part of our pre-hike nourishment. Yummm! 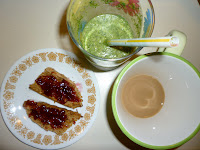 You can see my breakfast of coffee, spent grain bread with jam, and a green monster smoothie here. :)
This is such a delicious, hearty bread. It is best served toasted, I think, with a little butter/margarine, jam, or peanut butter... I wish I could just send you some electronically so you could taste it too! One of these days technology will make that possible, I bet...or, maybe not. That's a bit of a stretch. ;-)
And here's one final pic of the master brewer, Mike, and master baker, yours truly! See you next time, friends! 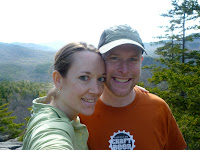