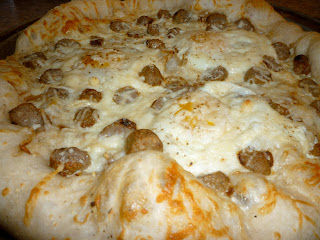 Pizza for breakfast! And I'm not talking about a cold leftover slice of pizza from the night before either. I'm talking about actually making a breakfast pizza! I made breakfast pizza for my family when they were in town this past weekend, and let me tell you, it was a hit! It was such a fun, unique recipe to make...and to boot, it was delicious too. ;-)
Now, I found this recipe on another blog I may have mentioned before - Smitten Kitchen. This woman makes some incredibly unique recipes, and this is certainly one of them! You can read more details about her recipe that I semi-followed here.
I started with store-bought pizza dough (to save time, I did not make my own!). I got one regular dough and one whole wheat dough. Next, I sauteed some shallots and put those on the dough first. I decided to make the first pizza an all meat one and the second one I made half meat and half veggie. 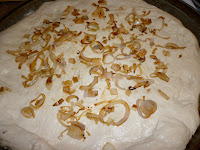 So, for the meat pizza, after the shallots I added sliced turkey sausage that I had already cooked (well, it was a pre-cooked frozen kind, so I essentially just heated it up before slicing it and adding to the pizza).
Next up was the eggs! And yes, you actually crack raw eggs on this pizza! Crazy, I know. You can check out what that looks like below. 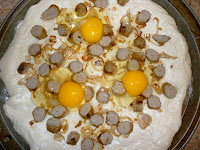 On top of the eggs I sprinkled some black pepper and then I added a couple types of cheeses - one was a shredded Italian blend and the other was parmesan. Then, you bake it! I baked this pizza at 375 degrees for approximately 12 minutes. Here it is baking in the oven...mmmm... :) 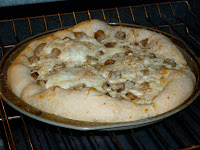 For the second pizza that was half meat and half veggie, I added sauteed shallots and sauteed mushrooms first, as you can see here. 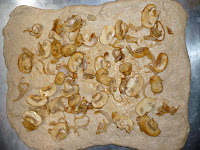 I also added some spinach, turkey sausage to half, sliced roma tomatoes to half, and the cheeses again...and then it was time to crack the eggs over top! There was something really satisfying about the whole cracking raw eggs on top of a pizza. I can't quite describe it though. Maybe it was the lack of mixing in that usually occurs after cracking an eggs...usually I'm cracking eggs to add to a batter of some sort and the eggs just disappear right away when I mix them in. Who knows what it was that fascinated me? But, maybe you'll understand once you try this recipe yourself and have fun adding eggs to your pizza. ;-)
So, here is the second pizza ready for the oven... Oh, and I also added some herbs (can't really remember which, although rosemary was definitely on there!). 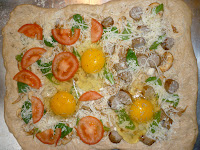 For some reason the eggs on the second pizza seemed to take longer to cook so I left the pizza in closer to 16 or 18 minutes (the first one only took about 12 minutes). With the first pizza, the egg yolks were very slightly runny - definitely cooked thoroughly after 12 minutes. When the second one was baking, I checked it after 12 minutes or so but the eggs weren't nearly done! They still jiggled quite a bit when I pulled out the pizza pan...so I just kept a close eye on them and let them cook until I definitely knew they were cooked thoroughly. Nobody wants to eat raw eggs (well, I don't anyway)! So, if you make this pizza yourself, you're going to half to eyeball it for the length of time you bake yours... ;-)
Here is the final second pizza. Again, sooooo good! 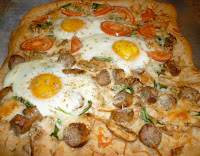 My dad used the terms "out of this world" and "outstanding" to describe this breakfast pizza, and other very positive adjectives were used by the fam as well! I will DEFINITELY be making this again. It's a super fun weekend brunch treat, I think! It's not the healthiest, per se, but it's fun and delicious, and we all deserve fun and delicious food every now and then. I was thinking more about this breakfast pizza too, and it's kind of like an omelette - but really not at all! Almost all of the ingredients I used are often used in an omelette...except for the pizza dough! So it's really more like a typical breakfast food than you think. :)
Try it and let me know what you think, friends! Enjoy! 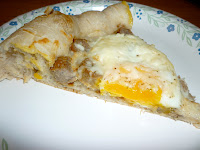 Check out another great savory breakfast treat idea over at "At Home with Haley." Her Buerge Breakfast Ring looks delicious! :)
Posted by Colleen at Tuesday, May 04, 2010