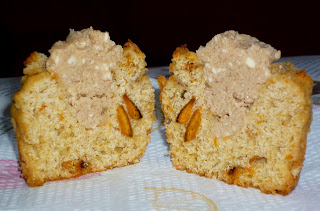 Surprise! It's another sweet potato recipe. I just can't get enough of those darn good sweet potatoes, folks! I saw this recipe for sweet potato muffins on an amazingly yummy blog called Vanilla Sugar. A while back I put this recipe on my "blog to-do" list, and then I recently had the perfect occasion to try it! As you may remember from my last post, my family celebrated an early Easter this past weekend. Well, my sister Melissa gave up desserts for Lent so I needed to accommodate her and make something she could eat! I thought to myself, hmmmm, this recipe is for muffins but they're slightly sweet so they might taste like a dessert....perfect! Melissa can still eat "dessert" with the rest of the fam after our Easter dinner. :)
This recipe was a little different from many that I make because it did involve a few extra steps (although I would not describe it as complicated, per se), and it required one ingredient that I do not use very often (mascarpone cheese). Otherwise, there was nothing to it, I'd say!
You can find the recipe I used from Vanilla Sugar here. One step that took a little longer was the need to roast sweet potatoes ahead of time for the "sweet potato puree." As you can see from the pictures below, I actually removed the skins before roasting the potatoes. 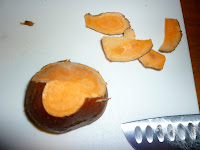 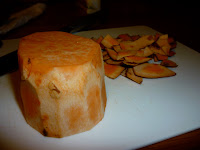 Generally I leave the skins on if I'm just making my typical roasted sweet potatoes or sweet potato fries. Anyway, so removing the skins took a few extra minutes than usual, but no biggie really! I actually baked them with olive oil, cinnamon, and nutmeg. Boy did they smell good when they were roasting!! 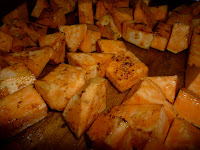 Here you can see me making the sweet potato "puree." I simply used a fork and then a whisk to mash the roasted sweet potatoes.  I suppose that I could have also put the cooled potatoes in a food processor too. Next time maybe! 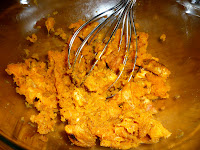 The next few pics entail the making of the actual muffins. I won't "narrate" too much. You can figure out what I did from the pics! Oh, and with the liquid ingredients I did make one change. The recipe calls for buttermilk, but I used light vanilla yogurt instead. 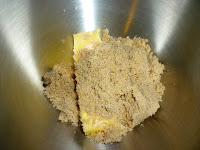 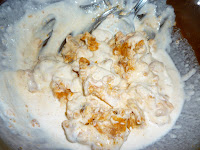 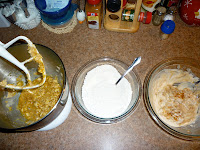 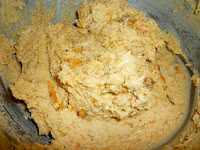 I had fun Easter paper cupcake liners, of course! 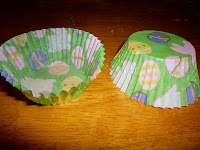 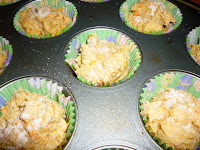 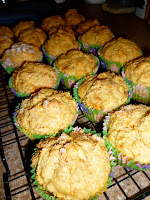 Now it's time for the cinnamon mascarpone filling...sooo delish, let me tell you! I had never actually tried mascarpone cheese before on its own, so I took a taste before I made the filling. It's good! I would describe it as a sweet cream cheese (in case you're also not yet familiar with it!). Below are a few pictures of me cutting out the centers of each muffin (to do this, I used a small grapefruit spoon that has serrated edges - worked great!) and then you'll see some pics of me piping in the filling. I did this while at my parents' house, so I had Mike and Melissa to take a few pictures of the process. Thanks, photographers!! 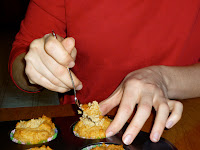 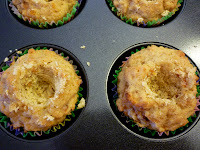 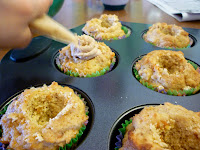 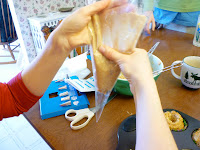 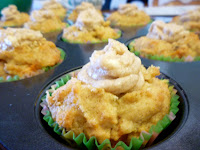 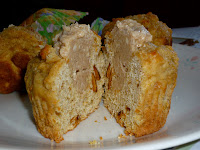 And there you have 'em! Sweet potato muffins with cinnamon mascarpone filling. These are definitely a delicious sweet treat (yet not technically a dessert, which was key for my sista :)) that I think you'd love. Give 'em a shot, and be sure to let me know if you do!
Posted by Colleen at Wednesday, March 31, 2010